After Bear finds coupons for the market, he decides to take everyone in the Big Blue House to the market. He runs into an unexpected delay when he finds out that Ojo has decided to repaint the wagon. Bear teaches her all about mixing paint to create different colors, Treelo admires all of his own colors in the mirror, and Bear plays fashion consultant when Tutter can't decide what color outfit would be best to wear to the market.

Bear is going to check the mail. After performing "What's in the Mail Today?" , Bear declares that today there is "a lot of interesting stuff." Tutter calls Bear over and wants to know if he got any mail. Bear looks through the mail to see what they got. There are coupons from the market - including a sale on green beans (which would be good for Treelo) and one on golden honey (perfect for Ojo, or Bear himself.) Tutter is disappointed, declaring the first "too stringy" and the second "too sticky." Bear then announces the third sale -- yellow cheddar. Tutter goes wild for this and Bear says that they'll go to the market. Bear just needs to get his wagon, and Tutter says he has to get dressed. Bear recalls that his wagon is in the attic.

When Bear gets up to the attic, he finds Ojo with some cans of paint. He suspects that something is up and sure enough, it is --- Ojo has decided to paint his wagon! Bear weakly protests that he needs it to go to the market, however Ojo is committed to making a "masterpiece." Bear agrees that it could use a new paint job and lets Ojo continue. Ojo wants to paint it orange, but doesn't have any orange paint. Bear helps her by showing her that she can mix red and yellow paint to make orange. But Ojo can;t make up her mind, and thinks maybe green would be better. Bear stays to help Ojo to mix one more color (purple) but then heads back into the living room.

"Color" Bear says, "It makes everything so beautiful." He cites examples (fireworks,a peacock&a rainbow) and soon breaks out into a song about colors - "Some of the Colors I See." Bear then asks what the viewers think, and in a film segment, kids discuss their favorite colors - include just about every color of the rainbow and, in fact, one kid's favorite color is rainbow colors!

Bear then hears Treelo laughing and soon finds him looking in the mirror. Treelo thinks that the "funny monkey" in the mirror is another monkey and doesn't realize he is looking at his reflection. Bear comments on how beautiful and colorful the monkey in the mirror is and shows Treelo just who it really is. Bear invites Treelo to the market and Treelo agrees to come with. Then, Pip and Pop show up. The duo is on their way up to the attic to help Ojo paint the wagon. Bear invites them to the market aswell and they agree to go once the wagon is done.

Bear, unoccupied at the moment, decides to look for Shadow. He sings her song and she appears. Shadow comments that she was dancing on the rooftops of the town. Bear asks Shadow if she has a story. Shadow does, and she tells a poem of an alligator that easts a a blue suede shoe. With the story over, Bear asks Shadow what color a shadow is. She tells him that she's not sure, but she thinks it's whatever color that the shadow is falling on.

Bear then hears Tutter again. He's in the kitchen shouting, "Oh, Cheddar chunks! Oh, Brie!" Bear decides to go find out what's going on. Tutter says that Bear wouldn't know how to help him attesting "How could a bear understand the problems of a mouse?" Bear continues to push and Tutter reluctantly decides to give it a try. He explains that he doesn't know what to wear to the market and warns Bear that helping him won't be easy. Bear thinks that he can help Tutter, but does comment that Tutter has an "extensive wardrobe."

First, Tutter comes out in an outfit that's all red. He likes the outfit, but worries about people's reactions: "Oh, they'll probably look at me and say "Hey! Look at that little mouse in red! He must really like to get attention!" Bear says that he doesn't know about that, but this doesn't seem to assuage Tutter's fears. Tutter dismisses the outfit. He comes back out of his mousehole with a black hat and yellow scarf. This time, he's worried folks will think he looks like a bumblebee. He dismisses this outfit too. Tutter getting more frustrated, and Bear offers a suggestion to calm him down. Bear says that Tutter should just wear what he likes best. After much consideration Tutter realizes that Bear is right. He comes back out in a camouflage hat and scarf. Tutter is now ready to go to the market.

After Bear and the gang return from the market, Bear tells viewer that it was a productive trip and now it's time to head back up to the attic to tell Luna, all about the day. Upon reaching the attic, Bear notices that Ojo and the others have cleaned up the attic and compliments them.

Luna appears and tells Bear that she was admiring the sunset on the other side of the world. Bear tells Luna all about the day at the Big Blue House. The two perform the "Goodbye Song" as some moments from the day are shown. The episode concludes with Bear thanking the viewer for visiting and turning off the attic light. 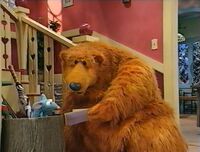 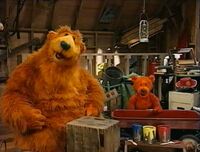 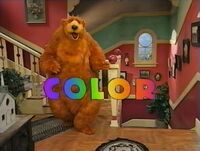 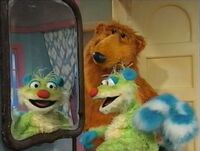 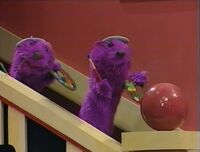 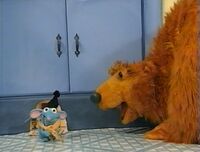 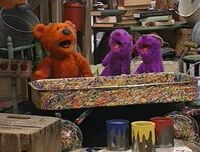 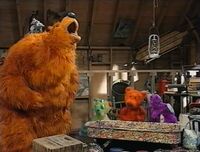 Retrieved from "https://muppet.fandom.com/wiki/Episode_111:_A_Wagon_of_a_Different_Color?oldid=1241470"
Community content is available under CC-BY-SA unless otherwise noted.