Fozzie gets stuck in a magician's trick cabinet. The cabinet is dragged onstage so that he can perform his act -- and at the end of the act, two pig stagehands tip the box over so he can take a bow. Crazy Harry, who makes frequent appearances (and frequent explosions) during the show, blows up the cage before the end of the show so that Fozzie can escape.

Jim Henson as Kermit the Frog, Rowlf, Whatnot Dancers, Newsman and Waldorf
Frank Oz as Fozzie Bear, George the Janitor, Sam the Eagle, and Mildred
Jerry Nelson as Droop, Shouting Lady, Herman, one of the Houses, Whatnot Girls, and half of the Two-Headed Singer
Richard Hunt as Scooter, Wayne, Miss Piggy, Statler, Pig Dancers, and half of the Two-Headed Singer
Dave Goelz as The Great Gonzo and Zoot
John Lovelady as Crazy Harry, one of the Houses, and the Announcer
Eren Ozker as Hilda, Janice, and Wanda 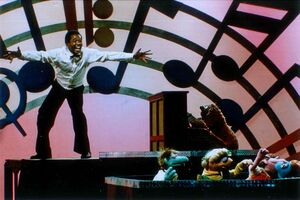 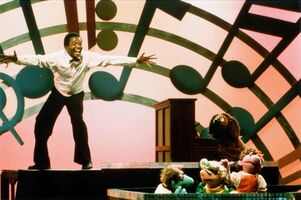 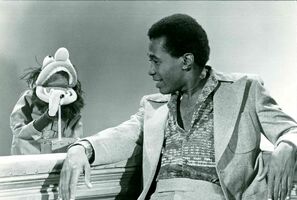 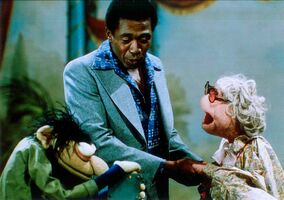 Retrieved from "https://muppet.fandom.com/wiki/Episode_117:_Ben_Vereen?oldid=1358500"
Community content is available under CC-BY-SA unless otherwise noted.