It's time for Bear to go to work, and a bear's work is berry-picking. He invites the viewers to join him as he locates his berry-picking bucket and hunts for berries to fill it, including strawberries, boysenberries, blueberries, blackberries and huckleberries. Before he finds his bucket, he finds Ojo and Treelo playing in the living room. Their game has come to a halt, as Ojo is tired of Treelo pretending to be a baby. Bear helps her to find something new to play and shows her how Treelo can still be the baby in the new game. Bear learns about Tutter's work, which includes cleaning up his mousehole and shopping for cheese. Shadow sings the song "I've Been Working on the Railroad" and gives Bear a tip as to where to find his berry-picking bucket. Later, after Bear finishes his work, Bear talks with Pip and Pop and helps them to see that they too did work today. 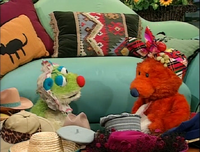 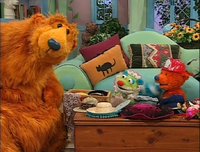 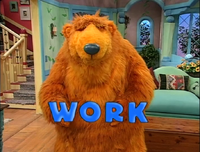 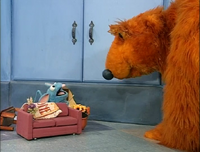 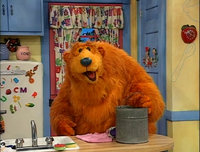 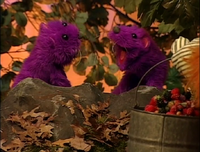 Retrieved from "https://muppet.fandom.com/wiki/Episode_118:_Working_Like_a_Bear?oldid=1271943"
Community content is available under CC-BY-SA unless otherwise noted.