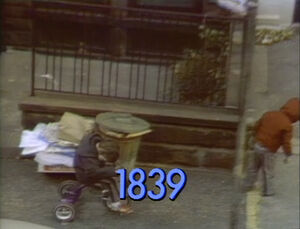 When actor Will Lee died in 1982, it left the producers of Sesame Street with the question of how to deal with the loss of Mr. Hooper, a beloved character who had been on the show since the first episode. Dulcy Singer, executive producer at the time, said that "if we left it unsaid, kids would notice."[1] One way out was to avoid the issue of death entirely. Producers toyed with the idea of telling viewers that the character had gone away. Caroll Spinney said that "we didn't know what to do. [We] thought perhaps he could just retire, move to Florida or something, but then the producers thought that the best thing to do would be to actually deal with death."[2] After much discussion and research, the producers decided to have the character of Mr. Hooper pass away as well, and use the episode to teach its young viewers about death as a natural part of life and that it is okay to grieve and feel sad when a loved one passes away.

After consulting with numerous child psychologists, Norman Stiles, the head writer for the show, prepared a script designed to deal with the issue of death on Sesame Street. The cause of death was not discussed on the show, nor is the process of growing old. Valeria Lovelace, director of research at the show's production company, the Children's Television Workshop, said "We were advised to take the direct approach... Children don't understand words like 'passing away.'"[1] The show took an honest and direct approach. Show producer Fran Kaufman said that the goal was to avoid "sugar-frosting" the message.

That message, according to the producers, was "[Mr. Hooper] died, he won't be coming back, and we are all going to miss him...Another message of the segment was that children have to understand that they will continue to be cared for."[1]

In the episode, Big Bird thinks that Mr. Hooper will return later, but is told about the irreversibility of death. Although he has already been told Mr. Hooper has died, Big Bird (like many children) shows his initial inability to comprehend this concept. But Big Bird's concern soon switches to his own needs. He wonders "Who's going to take care of the store? Who's gonna make me birdseed milkshakes and tell me stories?" The other adults reassure him that everything will be okay, but Big Bird says it won't be same. Bob addresses Big Bird's concern head-on saying "You're right, Big Bird. It'll never be the same without him. But you know something? We can all be very happy that we had a chance to be with him and to know him and to love him a lot, when he was here." Big Bird still expresses sadness and frustration, demanding why it has to be this way. After a pause, and in a callback to a previous scene, Gordon answers that it has to be this way, "just because." Big Bird thinks it over and then contemplates his drawing of Mr. Hooper, saying, "You know, I'm gonna miss you, Mr. Looper." Maria replies, laughing through tears, "That's Hooper, Big Bird, Hooper." The adults gather around Big Bird for an embrace.

The farewell episode aired November 24, 1983 (Thanksgiving Day). Loretta Long noted, in an interview on The Tavis Smiley Show, "We were very careful to do it over the Thanksgiving holiday, where there would be a lot of adults in the house to help the children."[3]

The filming of the scene was very emotional for the cast and crew, whom had worked closely with Will Lee for 14 years. Genuine tears were present in almost all on set. "We barely got through that show," said Bob McGrath in a 2006 interview. "Any emotions you saw were real. We tried to do a pickup and we got about a minute into it and we all fell apart emotionally. It crossed over not only from PBS, but all of the networks. They all felt it was such an important show that they took the time to highlight it."[4]

Mr. Hooper's death received a lot of press and drew many viewers. Reports stated that the episode was used to stimulate discussion of death in many homes. Valeria Lovelace commented, "It was a relief to us all that the segment worked as we hoped it would. It was really scary beforehand; we didn't know for sure how it was going to turn out."[5] The episode was soon selected by the Daytime Emmys as being one of the 10 most influential moments in daytime television.

The episode was later adapted into the book, "I'll Miss You, Mr. Hooper" by episode writer Norman Stiles. The full, uncut version of this episode is available for viewing as part of the collection at The Museum of Television and Radio. The scene with the adults explaining Mr. Hooper's death has appeared in script form in Sesame Street Unpaved, while portions of the scene have appeared in Sesame Street: 20 and Still Counting, Stars and Street Forever, Sesame Street Unpaved, A&E Biography: Sesame Street, and The Street We Live On. Select scenes from the episode have appeared on the videos 40 Years of Sunny Days, Old School: Volume 3, and 50 Years and Counting.

“The best episode we ever did was Mr. Hooper's death.
Those were real tears. Will was the sweetest man.”
—Caroll Spinney[6]