Mopatop opens the episode by offering a slurpy dog, a snorty hog in a squelchy bog, or a big bag of silent fog.

Princess Lulabelle is tired of living in a great big palace all by herself. She's hoping to find a handsome Prince Charming to love. Moosey Mouse wishes that he was a handsome prince, and tries to offer himself to Lulabelle. Puppyduck suggests that the Princess try kissing a frog -- but there aren't any frogs in stock.

Seeing the slurpy dog, she decides to try kissing him instead -- "dog" sounds like "frog". It doesn't work with the slurpy dog, the snorty hog, or the silent fog. Moosey tries to get in the way of her kisses, but the princess rejects him -- "mouse" doesn't even sound like "frog"!

A frog comes into the shop looking for a fly sandwich, and Lulabelle springs to his side. She kisses him -- and he turns into a handsome frog prince! Actually, he looks exactly the same, but now he's wearing a crown and a royal robe. Lulabelle is thrilled with her prince, and the frog is happy to return to the castle with her. 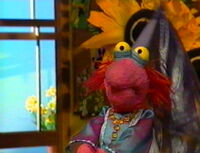 Princess Lulabelle arrives at the shop. 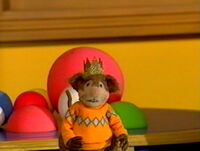 Moosey thinks he's got a chance. 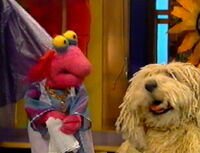 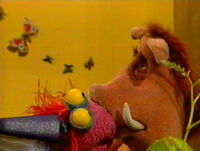 And she tries kissing the hog... 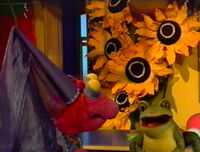 In walks a hungry frog.

After a kiss, the frog turns into a prince. 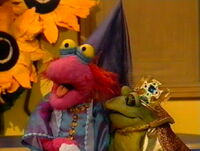 Lulabelle and the prince are ready for their new life.
Add a photo to this gallery

Retrieved from "https://muppet.fandom.com/wiki/Episode_202:_Princess_Lulabelle?oldid=1234462"
Community content is available under CC-BY-SA unless otherwise noted.