When the traveling Minstrels make another visit, Mokey decides she's always wanted to be a Minstrel, too. She takes off with the Minstrels, but Cantus, their cryptic leader, makes her doubt that she really has the dedication to follow this path.

Meanwhile, Doc buys himself a saxophone and takes lessons from its instructions. 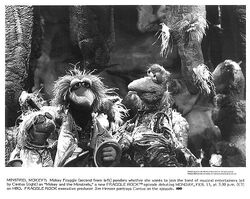 An advertisement for the episode.
Add a photo to this gallery

Retrieved from "https://muppet.fandom.com/wiki/Episode_207:_Mokey_and_the_Minstrels?oldid=1325576"
Community content is available under CC-BY-SA unless otherwise noted.