Robin wants his own spot on the show, but his uncle Kermit doesn't even notice him with bigger costars like Thog, Sweetums, and Timmy stomping around. The little frog even tries to run away but just ends up locked in his own suitcase. When Bernadette Peters notices him and tries to cheer him up, however, Robin finds out that all the Muppets believe in him. He becomes so confident that he demands to sing "They Call the Wind Maria," but Kermit settles on a cute, little song called "I'm Five" instead.

Meanwhile, Miss Piggy is so jealous that Kermit has decided to sing the opening number with Miss Mousey that she puts Statler into a hammerlock to ensure that he'll boo her performance. He and Waldorf even refrain from applauding Bernadette Peters after "Take a Little One Step" until Piggy gives her permission. The hecklers can't seem to catch a break when even Sam the Eagle gives them a hard time for laughing at what was supposed to be his somber retelling of "The Ant and the Grasshopper." 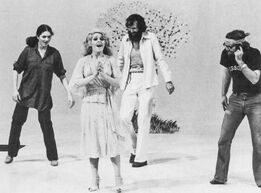 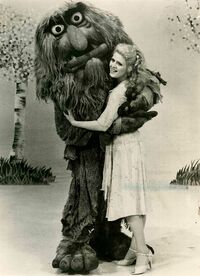 Retrieved from "https://muppet.fandom.com/wiki/Episode_212:_Bernadette_Peters?oldid=1202190"
Community content is available under CC-BY-SA unless otherwise noted.