It's time for the Annual Woodland Valley Storytelling Festival at the Big Blue House and viewers are invited to come and listen in! As everyone gets ready for the story, Bear prepares the food and other accommodations, while also stopping to help his friends in the Big Blue House. Tutter's found a great beginning and ending for his story, but it's seriously lacking a middle. Bear also helps Treelo and Ojo with an idea for telling a story in pictures. Finally, guests from all over Woodland Valley start arriving in droves - everyone from Doc Hogg to Big Old Bullfrog. Doc Hogg "entertains" everyone with the story of his life; Pip and Pop read from a comic titled The Adventures of Clamiana Jones; Lois tells a tale in off-key song and Shadow sings the tale of The Frog Prince.

Bear welcomes the viewers to the Big Blue House. He's really glad they're there today because today is the Annual Woodland Valley Storytelling Festival. This is a time every year when the inhabitants of Woodland Valley gather together for an enjoyable round of storytelling. Bear discusses various methods of storytelling and sings the song "Once Upon a Time."

Tutter calls for Bear, wanting to read him the story he made for the festival. Tutter's story is extremely short, only two sentences long --- "Once upon a time, there was a mouse. The end." Bear is stunned into a brief silence, but tells Tutter that it's a very good beginning and ending. It's just that he needs to work on the middle. Tutter realizes what he's done wrong and Bear gives him some tips --- i.e. what happened to the mouse, what did the mouse do next, etc.

Bear finds Ojo and Treelo in the attic. They're doing something for the festival too, but they don't feel like they've had much luck. All they have is a bunch of pictures featuring a bunny. They don't feel that they have a story yet, but Bear helps out once again. Bear helps them to see that pictures can tell a story. After all, one picture can be about a certain thing happening and then there can be another. Maybe the rabbit blasts off into outer space. With Bear's help, Ojo and Treelo are ready and raring to finish their story.

The guests are finally starting to arrive for the festival. Doc Hogg makes himself comfortable --- and hoggs the snacks as well! Pretty soon, almost everyone in the village is there. Lois, Big Old Bullfrog, Grandma Flutter are all among the attendees, and Jeremiah Tortoise serves as the judge. He and Doc Hogg trade amusing barbs about the slowness of the judging and the storytelling. The time comes for the actual storytelling. Tutter finally got his story together and tells an exciting and suspenseful tale about a mouse who did battle with a dragon. Pip and Pop read from a comic book titled The Adventures of Clamiana Jones. Treelo and Ojo put together their story in pictures and take turns telling it. Doc Hogg tells the story of his life, but nearly puts everyone to sleep. Just when they think it's over, he tells them that it's only the beginning of the story. Lois sings a screechy and off-key song about herself. Finally, Shadow tells a twisted version of "The Frog Prince." Big Old Bullfrog is moved to tears by the story.

Bear tells Tutter that he's learned to tell a wonderful story and Tutter thanks him for his help. Jeremiah does the judging, but decides that there's no winner. He thought the stories were all good.

Bear heads up to the attic to tell Luna about his day. Luna enjoys hearing about all of the different stories. Bear tells her that he's disappointed that he didn't have a chance to tell a story himself. Luna, however, tells Bear that he just told her a story --- the story of his day. She says that she always enjoys hearing these stories and then they perform "The Goodbye Song." After turning off the light in the attic, Bear remembers one last thing he wanted to tell the viewers --- he's all ears any time that they want to tell him a story. 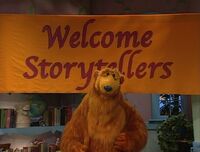 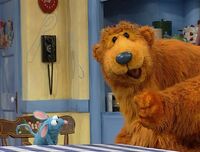 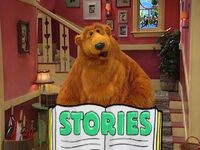 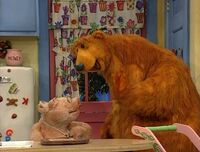 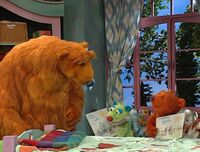 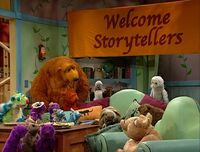 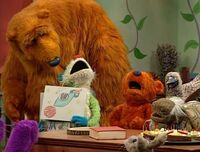 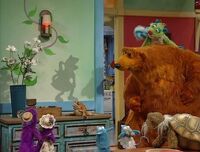 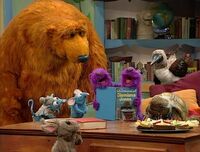 Retrieved from "https://muppet.fandom.com/wiki/Episode_238:_What%27s_the_Story%3F?oldid=1237557"
Community content is available under CC-BY-SA unless otherwise noted.