The Storyteller Fraggle tells the story of how young Matt Fraggle became an explorer like his Uncle Gobo and discovered radishes and the Gorgs.

UK Version: P.K. moves into the Lighthouse and doesn't expect Sprocket to be a dog. As P.K. is organizing his belongings, Sprocket causes mischief as the two don't get along. 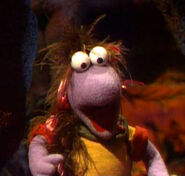 Dimple and Wimple Fraggle
Add a photo to this gallery

Retrieved from "https://muppet.fandom.com/wiki/Episode_315:_Born_to_Wander?oldid=1371096"
Community content is available under CC-BY-SA unless otherwise noted.