The babies play a game of basketball after obtaining jerseys. After they take them off to be washed, Gonzo does a stunt which ends up causing him to get splashed with hot water. When he puts his uniform back on, it's bigger than it was when he last wore it, so everybody thinks that Gonzo is shrinking. In the end, it turns out he got his mixed-up with Fozzie's. 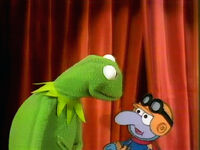