After being hit on the head by an exploding radish, Boober gets a case of amnesia. Trying to jog his memory, his friends take him out to the Gorgs' Garden, where things look so familiar that he decides that he's a Gorg. When Ma and Pa Gorg can't find Junior, they come to believe that Boober is their son transformed into a Fraggle by an evil sorcerer (whom is mentioned in "The Encyclopedia of Gorgish Myth and Wisdom" to reappear in their neighborhood on a specific day) and struggle to accept the changeling as the heir to the Universe.

Meanwhile in Outer Space, Sprocket pretends to be a cat in order to comfort Ned Shimmelfinny while Fluffinella is at the vet. 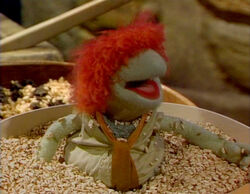 "Boober Gorg" in "Kellogg's Honey Smacks."
Add a photo to this gallery

Retrieved from "https://muppet.fandom.com/wiki/Episode_413:_Boober_Gorg?oldid=1369262"
Community content is available under CC-BY-SA unless otherwise noted.