While Treelo, Pip and Pop are staying at Otto and Etta's, Tutter holds a sleepover for all classmates at school at the Big Blue House, with Ojo joining in as well. The mice are astounded by the size of the house and everything in it, but Bear does his best to assure them that they'll be well taken care of. He suggests that they think of it as their "home away from home." They decide to play a game called "parmcheesy" and Ojo's worried because it sounds like a game only for mice, but Tutter assures her it wouldn't be a party without her. When it comes time for bed, Keisha wants to call her parents and soon all the other mice do too. As for Tutter, he's a bit worried what the mice will think of his stuffed toy, Kitty, but Bear shows him that they all have their own stuffed toys. As they settle in to sleep, Luke is first uncomfortable with his pillow and then wants to hear a lullaby. Shadow appears to sing her special lullaby, but Luke misses the one sung by his parents and wants to go home.

Bear welcomes viewers with the song "Come on In," singing that even though he has a long list and a full day ahead, "the Big Blue House is your house when you come on in." After sniffing us, he wonders if we've had some cookies and milk, but decides that maybe we just smell this good all the time. He comments that he's just prepared a snack for Tutter --- a lovely cheese tray.

He explains that Tutter is bringing a "couple of friends" over for a sleepover. He notes that sleepovers are really good practice for staying over a hotel. They're fun because there's many fun things to do during a sleepover --- playing games, eating snacks and just having fun with friends. Treelo, Pip and Pop are staying over at Otto and Etta's but Ojo is there for the sleepover. She tells Bear that it's time to head over to Mouse School to pick everyone up.

At the school, Tutter is talking about the sleepover with his friends. They're all excited about it, but Luke wonders just what one does at a sleepover. They talk about it and come with some great ideas, but decide to pass on Moss's suggestion of telling spooky stories. Bear arrives and Tutter tells "everybody" to grab their gear because they're moving out. Bear is quite surprised by the use of the word "everybody."

As Bear watches mice file into the Big Blue House, he realizes that this wasn't the small gathering he had expected. Realizing Bear's surprise, Tutter asks if it's all right that he invited the entire class --- he didn't want everyone to feel left out. Bear reluctantly agrees that it's fine. As the mice settle in, they can't help but comment about the massive size of the furniture and other items in the Big Blue House. Bear reassures them that he'll be able to take care of them. He welcomes them to think of it as their "home away from home" and sings the song "Home Away From Home" to reinforce it. The mice continue to explore, finding Tutter's cheese drawer. They quickly consume the cheese platter that Bear made earlier and asked for more. Luke suggests baked Brie, something his parents often make him at home. Bear agrees, noting that it can be fun to do something during a sleepover that you do at home. The mice then play a game called "parmcheesy," which is designed to test knowledge of types of cheeses. Ojo, worried that it's more of "mouse game," says that she's going to go up to her room to play. Tutter asks her to stay, saying that it wouldn't be a party without her. After all, sometimes its not about what you know, but just having fun together. As everybody gets together for the game, Bear expresses satisfaction that the party is turning out well and decides to start cleaning up.

It comes time to go to bed. Keisha asks if she can call her parents first. Bear agrees that it's okay and asks if the other mice would like to also. They all do, so they line up to make their calls. After this is done, Bear settles them down and turns out the light. He starts to leave, but Tutter quietly calls for him. Bear asks him what's wrong and Tutter explains that he always sleeps with stuffed toy, Kitty. He's worried because he's not sure what the other mice will think about her. Bear tells Tutter he has something to show him. He indicates the other mice and Tutter sees that he's far from being the only mouse with a stuffed toy --- all the other mice are sleeping with one too. Moss has a starfish, Keisha has a teddy bear and Luke has a crab. Tutter thanks Bear and Bear once again tries to leave, promising everyone that they'll go on a hike.

Luke, however, isn't getting comfortable. He first trades pillows with Tutter and then asks for a lullaby. All of the mice like this idea, so together they sing "Where O Where is Shadow" to summon Shadow, who performs "Shadow's Lullaby." Though Luke likes the lullaby, it wasn't the one his parents sing to him. He admits that he misses his Mom and Dad and says that he wants to go home. Bear tells him that it's all right and he can call his parents to pick him up. The kids, hearing the commotion, ask what's happening. Bear explains the situation and they tell Luke that they'll miss him. Luke, realizing how much his friends care about him, decides that he'll give it a shot and stay at the sleepover. That night, Bear talks with Luna about the sleepover. Bear tells her that it's all going really well. After talking for a bit, Luna comments that the world sleeps better when she's in the sky, so she sings "The Goodbye Song" with Bear and then rises back up into the sky. Bear bids the viewers goodbye, just as Luke calls for him, saying that he usually sleeps with a vaporizer and needs a glass of water. 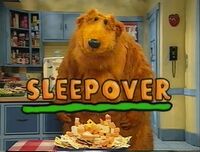 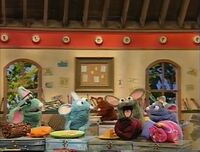 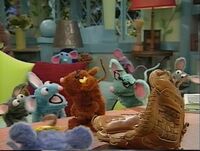 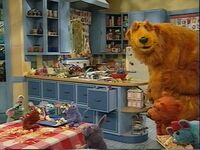 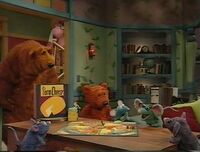 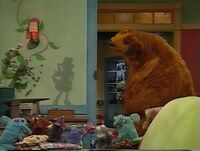 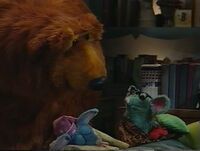 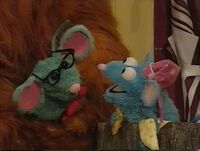 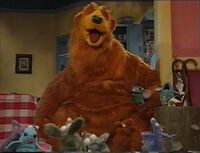 Retrieved from "https://muppet.fandom.com/wiki/Episode_423:_Tutter%27s_First_Big_Sleepover_Bash?oldid=1365366"
Community content is available under CC-BY-SA unless otherwise noted.