On Red Fraggle's birthday, she and Cotterpin Doozer find a talking mirror named Mavis. Mavis ends up directing Red to a tunnel leading to The Gorgs' Castle. While Pa Gorg and Junior Gorg are out unsticking Honkfish, Ma Gorg is left by herself on her birthday. Although Mavis wants to be a birthday present for Ma Gorg, Red wants Mavis as her birthday present.

Meanwhile, Doc and Sprocket are dealing with a surprisingly similar mirror from Ms. Ardath. 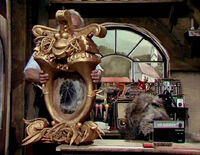 Retrieved from "https://muppet.fandom.com/wiki/Episode_501:_Mirror,_Mirror?oldid=1088951"
Community content is available under CC-BY-SA unless otherwise noted.