The episode begins with Doc and Sprocket taking a walk in Waterside Park. After they cross a bridge, Sprocket runs off into a Fraggle hole. He and Wrench Doozer then accompany Gobo on an exploring trip to Greyrock Ridge. Because Gobo doesn't believe that he has an "inner voice," he doesn't heed his feeling that they all might be in danger. 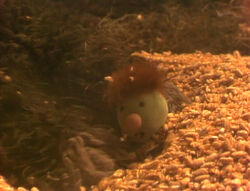 Retrieved from "https://muppet.fandom.com/wiki/Episode_503:_The_Voice_Inside?oldid=1319808"
Community content is available under CC-BY-SA unless otherwise noted.