When Mokey, Wembley and Boober re-enact an ancient ceremony in the Sacred Cave, they're mysteriously transported back to the past, to an era of bald Fraggles who never laugh. Mokey is brought face to face with Fishface Fraggle, the leader of the Fraggles who has terrible breath. She also meets Noodlenose Fraggle, who has a floppy appendage on his nose. Noodlenose loves to laugh, a heinous crime that gets him thrown in jail. Mokey learns that in ancient times, when Fraggles were bald and had leaders, it was prophesied that the Great and Wondrous Blundig would one day come to rule the Rock. When Mokey arrives, she is mistaken for the Great and Wondrous Blundig, and hailed as the new leader. Mokey makes the revolutionary suggestion to give up the idea of great and wondrous leaders in favor of Fraggles each leading themselves and all leading each other. She invents the phrase "Dance your cares away," which is immediately recognized as an inspiring concept and ushers in a new era in Fraggle history.

Meanwhile, Doc tricks Sprocket into thinking that he has gone into the future through the time machine he made for Mrs. Teelywally's school play, but can't help lifting his fake beard to drink his tea. 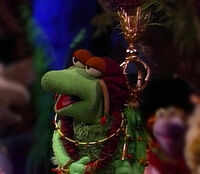 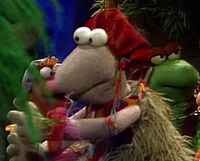 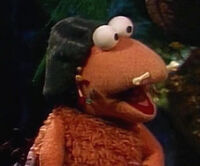 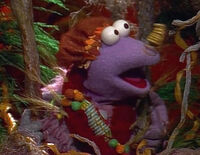 Noodlenose Fraggle
Add a photo to this gallery

Retrieved from "https://muppet.fandom.com/wiki/Episode_508:_Mokey,_Then_and_Now?oldid=1255552"
Community content is available under CC-BY-SA unless otherwise noted.