A messenger brings a message from the scheduled guest star -- Benny Brillstein, the Yiddish yodeler. Benny refuses to be on the show, so Kermit asks Chris, the messenger boy, to be the guest. Chris knows a joke, so Kermit introduces him as a comedian.

Chris' bizarre acts include owl impersonation and odd magic tricks -- "Pick a sausage, any sausage." Finally, doing an escape act in his dressing room, Chris locks himself in a wardrobe and can't get out. He has to do his final number, "Hawaiian Cowboy," from within the wardrobe.

Jim Henson as Kermit the Frog, Waldorf, the Newsman and The Swedish Chef
Frank Oz as Sam the Eagle
Jerry Nelson as Pops, Robin, Floyd Pepper, Mickey Moose, the Wolfhound and the Gnu
Richard Hunt as Scooter, Statler, Muppy, Pig and British Chap
Dave Goelz as Gonzo, Pig and Whatnot
Louise Gold as Molly and the Mutt
Steve Whitmire as Tommy the Goldfish, Melville and British Chap
Kathryn Mullen as Melissa and the Afghan Hound 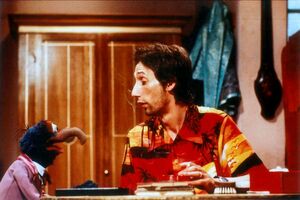 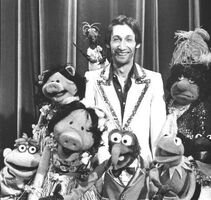 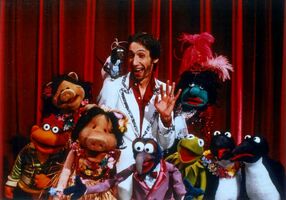