Episode 703: Operators Are Standing By

Animal hangs up on someone, and the Babies wonder who was calling.

Baby Animal finds he can't play with the other babies, then follows the sound of Nanny's vacuum out into the hallway. The noise frightens him, causing him to accidentally knock the phone receiver off the hook. He hears a voice on the other line, from Uncle Waldorf, who hangs up, assuming the connection is poor. He puts the phone back and Baby Kermit and Baby Gonzo rush him back to the nursery, knowing they're not allowed to play with the phone.

Upon their return, the babies ask who he spoke to on the phone. He responds with a buzzing sound. Baby Fozzie guesses it was the doorbell (that can't get in, or out), but Gonzo theorizes it could be killer bees coming from the south. He convinces them all to pretend to be bees, with Baby Piggy assuming the role of queen bee. They all buzz off, though Piggy's unfortunate, royal stature forces her to remain on the ground. They reach a bee sanctuary, where Gonzo tries to find out information about the telephone call, but deals with unhelpful worker and spelling bees.

Back at the nursery, Baby Piggy turns on the TV, hoping to catch her favorite film, Gone with the Wind. Instead, they're running Mona Montana: Hollywood Stunt Girl. Piggy suddenly wonders if the phone call was from Hollywood, offering her first, big role, only to offer it to Skeeter. She imagines herself on a movie set, which Piggy hijacks as Scarlett O'Hara. Despite everyone's warnings, she insists on performing, but finds herself doing Skeeter's dangerous stunts (like being shot from a cannon and crammed into an exploding box).

Gonzo continues pretending to be a bee and doing a special dance to ward off the killer bees. Everyone sings about what the phone call could've been about, but Gonzo asserts it was still bees. Fozzie proposes that the phone call was about turning the nursery into a used car lot, with Animal giving the O-K. He imagines himself as the car salesman. He shows Piggy a car he's built himself, full of surprise gags (that she doesn't appreciate). Gonzo buys a used car, which gets destroyed idling on the train tracks.

Animal now claims he heard a "hum" coming from the phone as well. Scooter thinks it could be aliens, who use the phone lines to control anyone who answers (based on a movie he's seen). Suddenly, they all start pretending to be monsters, save for Piggy, who runs for her life through the swamps. Gonzo saves her with his used car (having just finished putting it together), when a bee flies through the room, scaring them all.

Nanny follows the commotion to the nursery, where Uncle Statler and Waldorf have arrived. She lets the bee out of the window and tells the babies what a good deed Animal did by putting the phone back after her vacuum knocked it over. They all head out for some pizza that the old geezers have brought for everyone. 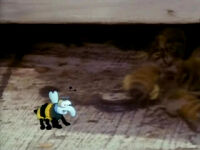 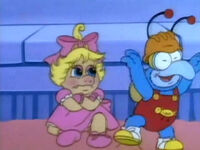 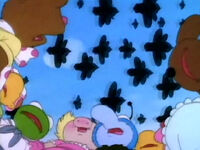 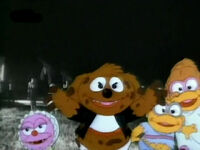 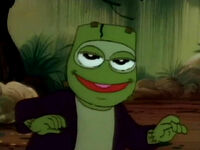 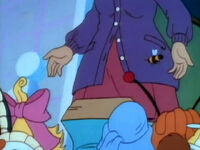