Episode 808: Eight Flags Over the Nursery

The babies hear that a theme park called Wonder World will open in five years. They don't want to wait that long so they build their own, Babyland. In the final scenes, they attend a movie screening featuring animated versions of their adult Muppet counterparts.

Nanny brings the babies a tray of fruit as they watch a nature documentary on monkeys, imagining themselves as primates as well. The television then shows a report on Wonder World, a new theme park and hotel that will feature large roller coasters, water slides, zoos and more. The babies get excited, but become disappointed when the report states construction will complete in five years. Baby Kermit thinks they'll all be grown up by then and Baby Scooter remarks that they could build their own theme park in that time. Inspired, the babies rush off to the nursery to start their own park.

They all assemble various supplies and let Scooter's computer organize all their ideas into a coherent park. Shifting to their imagination, an automated Scooter drives the babies via trolley car through their new theme park - Babyland. He directs them to the keypads, which can control which part of the park they visit. Baby Piggy wants to do things democratically and go first, when Baby Animal pushes a button anyway, sending them to the Wild Animal Cruise.

Scooter warns them of the dangerous animals they may see, but Piggy waves off his warning. She passes out, though, when they run into a shark, which gets frightened away by Animal. He gets out to swim with the shark and Piggy inadvertently hits another button, taking them to Doggy Roller Palace, a space just for Baby Rowlf. It turns out to be a hybrid doghouse / roller coaster.

Piggy now takes them to the park's Movie Studio, riding past adoring fans and photographers (who mistake her for Porky Pig's sister). As they arrive on the backlot, Scooter informs them that three lucky visitors will become actors in a new detective film. He chooses Kermit, Fozzie and (under threat) Piggy. They ride a conveyor belt through costumes and makeup, passing various celebrities along the way (including Humphrey Bogart, Cary Grant and John Wayne).

Skeeter and Baby Gonzo are the only ones left on the tour and Gonzo picks the next stop - Mr. Weirdo's Universe. Their cart transforms into a Gonzo-esque craft that sends them on a wild ride through all types of mixed media. The end up at the Babyland Theater, where they also meet up with Rowlf and Animal after their experiences.

They enter the theater and watch the movie, Kermit the Frog, Private Eye. However, the segment is cut short when Piggy refuses to be gorilla bait. She begins drawing her own, frog-less movie, though Kermit sneaks in some while she's not looking.

The babies continue exploring and find Scooter (now fully human) as the elevator operator. He takes them to the very high up top floor, squashing the babies to the floor of the elevator. A trip back down fixes them, when Piggy declares over the loud speaker that her movie is ready and they all must go to the theater. She plays her movie, Pigs in Space, and balks when she sees all the frogs involved. She lightens up when she sees how much everyone likes it, though.

Skeeter and Gonzo then show the rest of the group the musical commercial they've produced for their park. Nanny surveys the park they've created in the nursery and commends their work, then sends them off for lunch saying the last line of the series: "what will they think of next?". 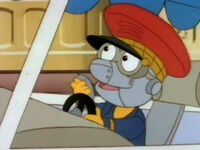 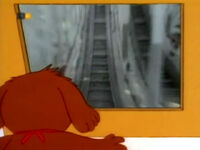 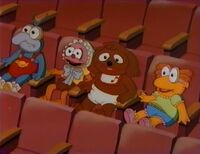 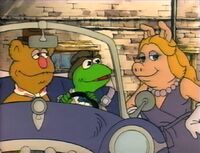 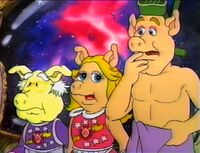 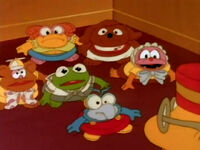 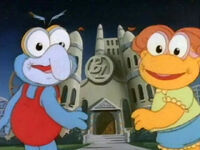 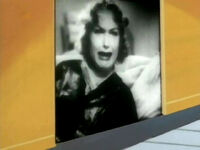