Ernie's Big Splash is a 1986 Sesame Street video game starring Rubber Duckie. The goal was to create a series of connections, for Rubber Duckie to make his way to Ernie's bathtub. The game teaches basic logic, directions (North, South, East and West) and sequencing.

The video game was created by CBS Learning Systems, for ages four to six.

The game was originally made for DOS,[1] but was released for the Nintendo Entertainment System in 1989. On NES, it was released on the cartridge Sesame Street ABC, supplementing Letter-Go-Round.[2] At some point in time, the game was released for the Unisys ICON operating system, a platform commissioned by the Ontario education system. No copies of this format exist, as the last ICON computers and software were destroyed in the early-2000s.

There is limited evidence that a version was released for Atari at a cost of $14.95, at the same time as Grover's Animal Adventures.[3]

Ernie's Challenge level
The Rubber Duck will be shown in one square some where on the screen. Ernie will be in another square somewhere else of the screen. The object is to get the Rubber Duck over to Ernie. You do this by selecting which path you’d like to use, from a wide selection, to get there. Ex. Say that there are 3 squares all together, starting from the left and going right. The Rubber Duck is in square #1 and Ernie is in square #3. Now, you want to go to square #3, which is to the right. So, select a panel that will get you there. Each panel will have to arrows in it, one representing where you’re leaving from, one representing where you’re going. We want to go the right, so select the panel with two arrows pointing to the right. Hey, look! You made it to Ernie! This is actually a lot simpler than it looks, so don’t worry too much. Once you’ve made it to Ernie, a little song and dance will take place. After words, pressing the A button will repeat the little show, but in reverse. Pressing Start will start a new game.[4] 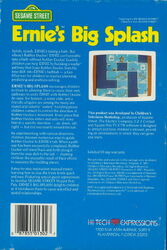 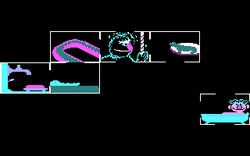 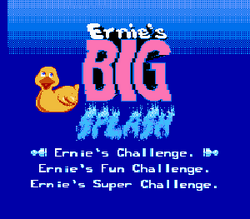 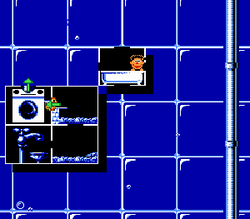 Retrieved from "https://muppet.fandom.com/wiki/Ernie%27s_Big_Splash?oldid=1089436"
Community content is available under CC-BY-SA unless otherwise noted.