Ernie's Hits is one in a series of character-centered Sesame Street albums released in 1974. Although some of the material comes from the earlier Columbia albums, some tracks appear here for the first time, including two classic Ernie and Bert sketches, as well as skits featuring Ernie with other characters. On later editions of this album, "The Wrong Patient" was dropped and replaced with Ernie singing "El Patito", the Spanish version of "Rubber Duckie". This album was later released as part of the 2-LP set Bert and Ernie: Side by Side, also with the "El Patito" substitution.

While Guy Smiley is credited on this album, he does not actually appear. The Ernie and Cookie Monster letter sketches are introduced by an announcer, played by Jerry Nelson. 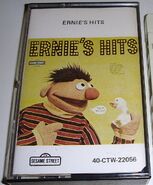