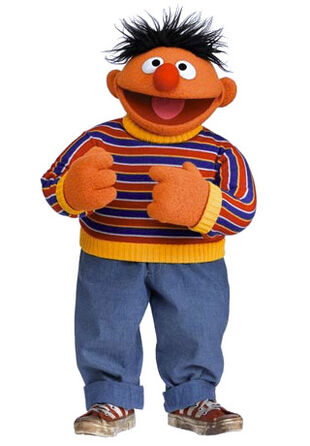 Ernie has been one of the stars of Sesame Street since its first episode in 1969. Ernie and his best friend Bert share the basement apartment at 123 Sesame Street. Together they form a comic duo that is one of the program's centerpieces, with Ernie acting the role of the naïve trouble-maker and Bert the world-weary foil.

Ernie is well known for his fondness for baths with his Rubber Duckie, and for trying to learn to play the saxophone although he wouldn't "put down the duckie." Ernie is also known for keeping Bert awake at night, for reasons such as wanting to play the drums, wanting to count something (like sheep), to observe something like a blackout, or even because he is waiting for his upstairs neighbor to drop his shoes.

He has a distinctive, chuckling laugh (a trait he shares with his baby cousin Ernestine).

Many Ernie and Bert sketches involve Ernie wanting to play a game with Bert, who would much rather do something else (like read). Ernie keeps annoying Bert with the game until Bert joins in -- and usually, by the time Bert starts enjoying the game, Ernie is tired of playing the game and wants to do something else. Other sketches have involved them sharing some food by dividing it equally, only for one of them to have a bit more than the other, leading Ernie to make it even by eating the extra piece.

Ernie has also frequently made appearances without Bert. He has regularly appeared in skits with Cookie Monster, Sherlock Hemlock and Lefty the Salesman.

From season 33 until season 36, he and Big Bird starred in a daily segment called "Journey to Ernie". Starting in season 39, Ernie and Bert have appeared in animated form in the Bert and Ernie's Great Adventures segments.

Play with Me Sesame

Ernie was one of the hosts of Play with Me Sesame. One regular segment that he hosted was "Ernie Says", a variation of "Simon Says".

Ernie has appeared in both of the Sesame Street movies. In Follow That Bird, he and Bert searched for Big Bird by plane. Ernie piloted the plane, and eventually, after they found Big Bird, he flew the plane upside-down, singing "Upside Down World". However, after they lost Big Bird, Ernie blamed Bert.

In The Adventures of Elmo in Grouchland, Ernie and Bert served as hosts. Whenever it looked like something unsettling happened, Ernie had to reassure Bert (and the audience) that nothing bad was going to happen.

Ernie also appeared in the finales of The Muppet Movie and The Muppets Take Manhattan, in the last of which he got a line.

In Christmas Eve on Sesame Street, Ernie decided to buy Bert a cigar box to store his paper clips in. However, as he didn't have any money, he traded his own Rubber Duckie for it. At the same time, Bert decided to get Ernie a soap dish to put his Rubber Duckie in, so that it wouldn't keep falling into the tub, but had to trade his paper clips for it. However, Mr. Hooper could tell that neither of them really wanted to give up their prized possessions, so Mr. Hooper gave them their things back as presents.

Ernie and Bert introduced a montage of Sesame Street clips in The Muppets: A Celebration of 30 Years. Ernie also narrated a Christmas pageant, 'Twas the Night Before Christmas, in A Muppet Family Christmas. In that same special, Ernie and Bert had a conversation with Doc, making them the only Sesame Street characters (not counting Kermit the Frog) to have interacted with Doc.

In Sesame Street: 20 and Still Counting, he and Bert got a new video camera, and he talked Bert into using the camera to record footage of Sesame Street so that they could watch Sesame Street on television.

Ernie is a Live-Hand Muppet (unlike Bert, who is a Hand-Rod Muppet), meaning that while operating the head of the puppet with his right hand, the puppeteer inserts his left hand into a T-shaped sleeve, capped off with a glove that matches the fabric "skin" of the puppet, thus "becoming" the left arm of the puppet. A second puppeteer usually provides the right arm, although sometimes the right arm is simply stuffed and pinned to the puppet's chest. Other puppets of this type include Cookie Monster, Fozzie Bear, Beaker and Bunsen Honeydew

“It was last-minute, and I’m such a huge fan of Steve’s and Jim’s, and there was all this debate about “Should it be more like Jim’s Ernie, or more like Steve’s Ernie?” and finding what worked.

It’s one of those things I wish I could go back and redo. I was so young, and I think my nervousness came through. But it was really neat, and it was an honor to hold that puppet up, like “Oh my god, what’s happening? I’m living in some alternate universe.” It doesn’t feel like I’m actually doing Ernie, you know.[4]”