In a 2017 interview on The Jenny McCarthy Show on SiriusXM Satellite Radio, Bert recalls that the two became roommates when Bert placed an ad in the Sesame Street newspaper and Ernie, looking for a place to live, was the only applicant.

The living room's furnishings sometimes vary from sketch to sketch. There is a large armchair - either a green one or a yellow one, or on some occasions, both. Despite being a basement apartment, the apartment has two windows, with a framed portrait of Bert and Ernie hanging between. The same picture can also be seen in the bedroom at times, between the windows. The main door in and out of the apartment is located on stage right, or the left side of the TV screen. There is a hallway or vestibule outside the front door where Bert, and a few guests, have been seen waiting to enter the living room. A table is sometimes set up for checkers or other activities. A small end table with a lamp is sometimes set between the two armchairs under the painting. The bedroom and bathroom are both to stage left, as are a set of built-in bookcases. The kitchen is located to the right of the main entrance (towards the camera). Ernie has a window box outside one of the windows, where the Twiddlebugs live.

A countertop peninsula separates the living room and the kitchen. Bert and Ernie are sometimes seen eating or setting food on the counter, usually from the living room side. The kitchen itself is only rarely shown onscreen, but can be seen in a 1978 sketch with Cookie Monster, and elsewhere.

Ernie and Bert's bedroom was first seen in Episode 0131, the 1970 Season 2 premiere of Sesame Street. The bedroom is essentially the same set as the living room, redressed with different furniture. It includes two single beds (one for Bert and one for Ernie), a night stand and lamp. Again windows are present that allow Bert and Ernie to look out to the moon and stars. In "I Love My Toes" a view of the floor of the bedroom shows it is bare and has toys lying around.

The bathroom includes "Rosie" the bathtub and is home to Rubber Duckie. Ernie is often seen bathing and singing in the bathroom. Oddly, no toilet is visibly present.

There have been a number of different bathroom sets. In the original version of the song "Rubber Duckie" and the first episode, the living room set was used, with a bathtub in the set. In the second version of "Rubber Duckie", the bathroom was a plain blue background, with a bathtub. In a sketch in which Bert attempted to give his nephew Brad a bath, the bathtub was closer to the back wall of the bathroom, while in Christmas Eve on Sesame Street it is farther from the back wall, and in the song "Do De Rubber Duck", the bathroom consisted of an elongated bathtub, one wall, a visible sink, and a visible clothes hamper.

In at least two sketches, Ernie is seen to have had his own hobby room. In one sketch, Ernie is smelling flowers when Bert enters and asks, "When are you going to clean up your room?" Ernie says he'll clean it the Tuesday after next. Ernie keeps a fish mobile in his room, a grandfather clock, as well as toys, and laundry tossed around the room. The room was also seen in a sketch where Ernie says he has "flying fingers" and tries to find ten different things that his fingers can do.

Over the years the sets have evolved and changed slightly. During the first season of Sesame Street, there were a couple of scenes depicting only one bed in a bedroom, implying separate bedrooms. Several illustrated books also show separate bedrooms for Ernie and Bert depending on story needs. At least one book, My Name Is Ernie, depicts the apartment as being on an upper floor of the building, not the basement. In the film Follow That Bird, a remade living room was shown that was more detailed and realistic than the version seen on the show. In Bert and Ernie's Great Adventures, they have a whole new bedroom, shown to be the top floor of the apartment building. 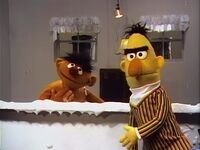 The living room set used for the bathroom. 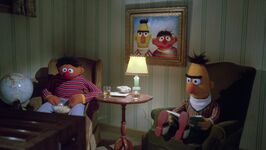 Ernie and Bert's apartment as seen in Follow That Bird. 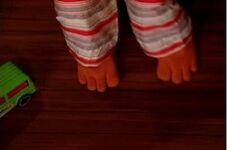 A view of the bedroom floor in "I Love My Toes." 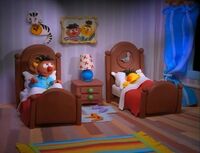 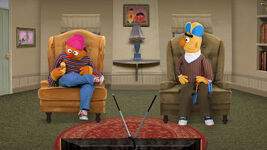 A rare full view of the living room with a carpet floor from "Bert and Ernie of Sesame Street."