Espinete is the main Muppet from Barrio Sésamo, the Spanish co-production of Sesame Street. Espinete appeared on the show from 1983 to 1987.

Espinete's gender has been open to debate for some time, specially after the end of his appearance in the series. Although Espinete is played by an actress, Espinete has a male name (a hypothetical female version would be "Espineta") and is always referred to using male pronouns (example, in his song "Espinete, Espinete, el amigo de los niños" - hypotetical female version would be "...la amiga de los niños"). Another character, Don Pimpón, said once that Espinete is "just a (small) boy" (In Spanish "sólo un niño", which could also be arguably translated as "just a child.")

Espinete does not wear clothes during the day. However, he wears pajamas when going to sleep (including a nightcap), and he also has used disguises (including a wizard, Dracula and a superhero called Super Espi).

Initially, Espinete lived in a forest with other hedgehogs. He then moved to Barrio Sésamo, where he wanted to live "under a tree". Human adults in Barrio Sésamo tried to convince him to live in a normal house, but the children disagreed. Finally, it was decided that Espinete would live in a garage, owned by one of the adults but not used, which was adapted into a room.

From his behavior, it must be understood that Espinete is a child. He is friends with most, if not all, of the characters in the Barrio, including references to "his friends Epi and Blas" (Ernie and Bert), although Espinete does not appear with them in any sketches. He does not have a single "father figure", but many of them in the form of all of the adults in the Barrio (particularly Chema the baker, who has no children of his own; and monster Don Pimpón).

Sometimes, Espinete seems to be just as childlike as other children in the Barrio. Sometimes, however, he does show a greater degree of knowledge: for example, he is familiar with the concept of a password while other children, and even adults, are not.

One of Espinete's most popular songs was Un erizo como yo ("A hedgehog like me").

Espinete was performed by actress Chelo Vivares, who was married to actor Juan Sánchez (Chema the baker). They were married until Sánchez's death in 2008.

Espinete was bigger than a human, and his mouth must be operated using Chelo Vivares's hand, as a hand puppet, similar to Big Bird. Thus, Vivares had only one arm available. Using a string, Vivares' movements with one arm were followed by a similar but opposite movement of Espinete's other arm (If Vivares moved her left arm towards the front, the right arm moved towards the back). Don Pimpón was operated similarly. In some of the episodes Espinete had closed his eyes while thinking, playing and sleeping. He has also moveble eyebrows.

Espinete (Vivares) has appeared in theatre versions of Barrio Sésamo that were performed after 1987 alongside Sánchez as Chema and another actor from the series, José Riesgo as Julián.

In 2019 there was an Exhibition that went trhough Spain where you could hug Espinete. They had the real puppet on display and free to touch and hug. 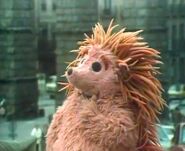 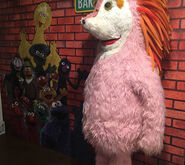 Espinete on the EGB Expo
Community content is available under CC-BY-SA unless otherwise noted.
Advertisement