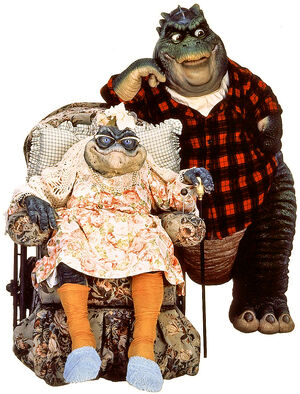 Ethyl Phillips, neé Hinkleman, is the cranky mother of Fran Sinclair on Dinosaurs. Seventy-two-year-old Ethyl is wheelchair-bound, but still takes regular swipes at her son-in-law Earl Sinclair with her cane. Though the character's first taped appearance was "Employee of the Month," in which she comes to visit the Sinclair Home, her television debut came much earlier, in the first season episode "Hurling Day." After being persuaded by Robbie and Fran that she doesn't have to go through with Hurling Day and tantalized by the prospect of making Earl's life a continual misery, Grandma Ethyl becomes a permanent member of the Sinclair household.

The cynical Ethyl derides Earl as "Fat boy," but has a soft spot for Baby Sinclair, often reading children's stories or lurid romances to him. Ethyl's late husband was Grandpa Louie, who she still expresses a sentimental longing for.