In fairy tales, a Fairy Godmother is a fairy with magical powers who acts as a mentor or parent to someone, in the role that an actual godparent was expected to play in many societies.

In a Season 2 story, "The Magic Apple", a Fairy Godmother grants a wish to Ernie, a poor but honest farm boy. (First: Episode 0133) She was performed by Fran Brill, and made from the Lavender Anything Muppet.

To prove him wrong, she changes him into a handsome prince -- but he hates it, and insists that she change him back. Happy to be back in his old body, he tries to grab the Fairy Godmother's wand -- and a spell fires which changes her into a furry blue monster, just the way she used to be before. She's horrified, but Cookie Monster assures her that she's beautiful. "I think I love you!" she coos, and he leads her off-screen to a "happily ever after." 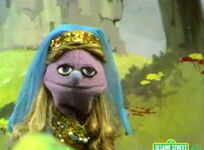 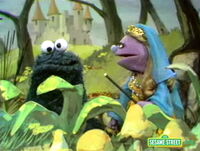 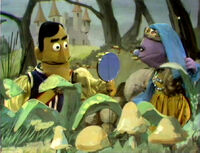 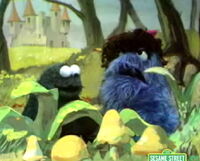 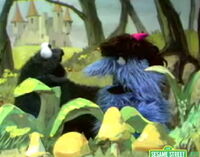 Cinderella's Fairy Godmother appears in a "Sesame Street News Flash" sketch, accidentally giving Kermit the Frog the beautiful dress that should have gone to Cinderella. This Godmother was performed by Camille Bonora, and made from the Fat Blue Anything Muppet.

The Fat Blue Fairy Godmother made a few more Sesame Street appearances, performed by Fran Brill. She appears to the aid of Maria in Episode 3067 to give her new clothes, after her work shirt is chewed up by Oscar's pet goat, Lassie. She also appeared in Episode 3206 (when Big Bird mistakes her wand for a toy), and in the direct-to-video special A New Baby in My House, serving the same wish-granting function for Princess Azalea and Prince Firstly.

Another iteration of Cinderella's Fairy Godmother appears in Episode 4101, performed by Jennifer Barnhart and made from a large pink Anything Muppet. In the episode, the godmother had meant to send Cinderella to the ball, but accidentally turns her into a physical ball that falls into the hands of Elmo, Zoe, and Baby Bear.