First Times is a 1986 Sesame Street Golden Tell-A-Tale Book. It was later reissued as a First Little Golden Book. The book deals with milestones in growing up, and in life in general. These life markers include first steps, first trips to school, and even Mumford's first trick and Sherlock Hemlock's first case. Herry Monster's infant sister Flossie is featured, but named only as "Baby Monster," and Barkley appears as a puppy. Also, Ernie buys a giant pencil. 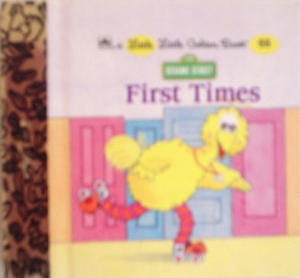 Add a photo to this gallery
Retrieved from "https://muppet.fandom.com/wiki/First_Times?oldid=1089809"
Community content is available under CC-BY-SA unless otherwise noted.