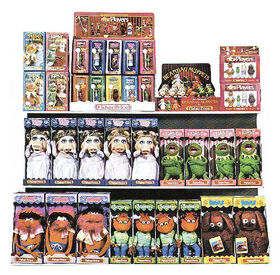 Fisher-Price is a toy company founded by Herman Fisher, Irving Price and Helen Schelle in 1930. From the 1930s through the 1960s, the company's primary product was wooden toy dogs.

In the 1960s, Fisher-Price began producing its popular line of Fisher-Price Little People -- small figures of people and dogs with cylindrical bodies, who fit into specially made vehicles and buildings. The first Little People set was a school bus, with human characters who fit inside, "sitting" in circular holes. The original Little People figures were made of wood, with plastic vehicles and buildings; later, the figures would be made of plastic as well. The Little People toys were an instant success, and the school bus was soon followed by more sets. In 1969, Herman Fisher retired as President of Fisher-Price, and the company was sold to the Quaker Oats Company.

During the 1970s, Fisher-Price created two popular lines of Muppet toys: a Sesame Street set of Little People, and a line of dolls based on The Muppet Show characters.

The Sesame Street Little People line, produced between 1974 and 1977, included two sets -- an "Apartments" set modeled after the main buildings on Sesame Street, and a "Clubhouse" for the Muppet characters. 16 Sesame characters were produced as Little People, including three humans (Susan, Gordon and Mr. Hooper).

Beginning in 1977, Fisher-Price produced a line of Muppet dolls. These were the first toys produced to tie in with The Muppet Show, and they were released during the summer between the show's first and second seasons. The first set of toys in the line were a Kermit doll, a Fozzie Bear doll and a Rowlf puppet. The set grew over the next five years to include more dolls and hand puppets, beanbag toys, Dress-Up Dolls, and a set of stick puppets.

Sesame and Muppet characters were also included in the line of Talk-to-Me Books produced in the late 1970s.

Fisher-Price became an independent company in 1991, and was then acquired by Mattel, Inc. in 1993. In 1997, Mattel bought Tyco Toys, who had produced the hugely popular Tickle Me Elmo doll the year before. With Fisher-Price and Tyco owned by the same parent company, "Fisher-Price" became Mattel's overall brand name for its infant and preschool products.

From late 1998 to early 2000, most of Tyco's Sesame Street toys (and all of Mattel's Bear in the Big Blue House toys) were marketed under the Fisher-Price label. After Mattel was restructured in 1999, Fisher-Price took over production of both the Sesame and Bear toy lines from 2000-2010 and 2000-2002, respectively.

They also produced toys specially made for international markets, like a Hindi-language Hokey Pokey Elmo, and toys featuring the names of Hindi names of American characters, as they appear on Galli Galli Sim Sim and other adaptations. 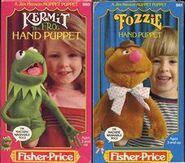 Elmo joins Winnie the Pooh, Blue, Dora the Explorer, Barney and Mickey Mouse on the front cover of Fisher-Price Character Brands Toy Fair 2002 catalogue.
Add a photo to this gallery

Retrieved from "https://muppet.fandom.com/wiki/Fisher-Price?oldid=1204698"
Community content is available under CC-BY-SA unless otherwise noted.