The Fix-It Shop is a business on Sesame Street run by married couple Luis and Maria. They can repair just about anything, though the considerable number of toasters they are seen fixing, is suggestive of that appliance being their specialty. The toasters they have fixed have come in a spectrum of sizes, including giant ones dropped off by Mr. Snuffleupagus and his family. In the days before Snuffy was seen by the grown-ups, many people were perplexed by the sheer size of these toasters.

The Fix-It Shop opened in Episode 0330 as the L and R Fix-It Shop, originally run by Luis and Rafael. Their first job was repairing Susan's broken picture frame. Rafael left the show after season three, and the shop was thereafter known only as the Fix-It Shop. Luis ran the shop alone for several years before hiring Maria in Episode 0832,[note 1] and later made her a full partner in Episode 1563.

The shop was renovated in season 11 over the course of several episodes in which Luis's neighbors helped him paint and refurbish the space. The space generally looked "cleaner" after the refit, and one distinctive addition was a series of drawers against the back wall painted in primary and secondary colors. Notably absent from the storefront was any sign indicating the name of the establishment. During the remodeling, Oscar the Grouch developed a tunnel system linking his trash can to the trash bin in the shop, which he used periodically in the following years.

The Fix-It Shop is located next door to Hooper's Store, in a building that was previously a Pet Shop[1] and the Sesame Street Library. A workbench on the sidewalk in front of the shop allows Maria and Luis extra space for their repair work.

Over the years, the space that housed the Fix-It Shop has become home to various other business establishments including the Mail-It Shop and a laundromat (it was converted back to a Fix-It Shop again from Season 37 to Season 39).

The business and its absence from the modern-day block was referenced in Episode 5029 as a part of Yucky Mama's treasure map from 1969 (even though the shop wasn't established until 1972). The current-day residents find the remaining indicator of the space's former identity is a broken toaster still sitting in the window of the laundromat.

In the 1992 book, Grover's 10 Terrific Ways to Help Our Wonderful World, the Fix-It Shop is given particular attention as an example of the prescient environmentally responsible idea to have personal items repaired when possible for continued use rather than simply replacing them. In the illustration of this tip, the various monsters of Sesame Street are delivering their damaged possessions to Luis who evidently appreciates both their responsible behavior as well as the business. 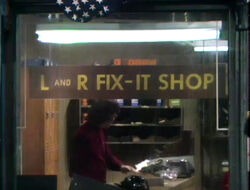 The "L and R Fix-It Shop" signage from its opening in Episode 0330. 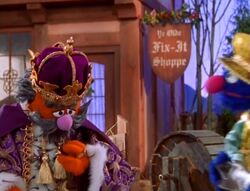