A Flea circus refers to a circus sideshow attraction. The first records of a flea performance date back to 1833 in England, and it continued on until the 1970s when it became a lost artform.

Various techniques are used to create the illusion of a "circus." Some attractions use live fleas, sometimes attached to various props, or left to roam free. Oftentimes these displays use chemicals to encourage fleas to repel objects from them, or vice versa.

Others use no fleas at all, and instead use mechanical, electrical, or magnetic devices to give an illusion to the audience, allowing them to suspend disbelief and enjoy the show in much the same way that they know that a magician won't really saw a girl in half.

The flea circus has been referenced in popular culture from Charlie Chaplin's Limelight to Jurassic Park and Pixar's A Bug's Life. 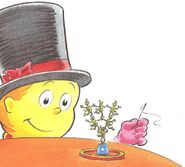 Sue Snue, trainer of fleas
Add a photo to this gallery
Wikipedia has an article related to:
Flea circus
Retrieved from "https://muppet.fandom.com/wiki/Flea_circus?oldid=1282836"
Community content is available under CC-BY-SA unless otherwise noted.