Flower-Eating Monster is a purple, dog-eared monster with fangs. He debuted in a sketch on The Julie Andrews Hour, where he got his name for eating flowers.

He was performed by Jim Henson in his initial appearance and in the At the Dance sketch on episode 101 in The Muppet Show. When his dancing partner told him that she didn't mind if he smoked, smoke literally started to billow from his head and spread across the dance floor. In episode 119, he joined the chorus of monsters accompanying Vincent Price in the final number.

Flower-Eating Monster's other prominent appearances include his stint as a member of The Vile Bunch, Alice Cooper's band on episode 307 of The Muppet Show and his portrayal of Flatcap Frankie in an episode of Mopatop's Shop. 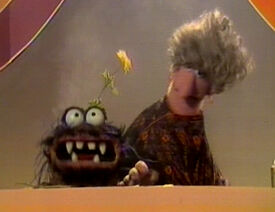 Retrieved from "https://muppet.fandom.com/wiki/Flower-Eating_Monster?oldid=1292090"
Community content is available under CC-BY-SA unless otherwise noted.