Floyd Pepper is the bass player for the Electric Mayhem band on The Muppet Show. He first appeared in the 1975 pilot The Muppet Show: Sex and Violence. One of the more vocal band members, Floyd's hip sarcasm is often directed at other Muppet Show regulars, particularly Miss Piggy. Frequently paired with Janice, Floyd also has a certain influence on Animal, or at least as much as anyone can. In picture books such as The Case of the Missing Mother, or certain installments of the Muppet comic strip, Floyd is practically Animal's keeper, pulling his chain and looking after him.

At a Museum of Television and Radio seminar in 1992, performer Jerry Nelson said:

Floyd's costume and last name are a reference to the Beatles' album Sgt. Pepper's Lonely Hearts Club Band, and he lists his musical influences as including Fats Waller, Fats Domino, Minnesota Fats and David “Fathead” Newman….[1]

On August 7th 2016 at Outside Lands, in an interview with Fuse host and reporter Katie van Buren, Floyd stated his age as 43 years old.

On The Muppet Show, Floyd regularly appeared backstage and interacted with characters outside of The Electric Mayhem. He has also been involved in the plot of a few episodes.

In episode 123, Floyd led the band in quitting because they didn't like the theme song. Floyd later told Kermit that the band would stay if he wrote the theme song. However, Kermit did not like this new theme (Fugue for Frog), and it was never explained on the show how Kermit was able to get the band to stay. They just appeared in the next episode, as if there was never any conflict at all.

In episode 201, Floyd was very active backstage, as the band decided to make Fozzie Bear an honorary hip person because he planned on making "Lullaby of Birdland" the closing number, and he gave Fozzie a pair of shades for being hip. However, after the performance, the band took a vote and decided that Fozzie was no longer hip, and Floyd took Fozzie's shades away.

In episode 305, Floyd was chosen to appear in the Muppets performance of "Camelot", in a role that Floyd wasn't too thrilled to be playing.

In episode 316, when the annoyed Statler and Waldorf left their box, Floyd and Janice took place on the balcony and made reflexions during the show instead of the two old codgers.

In episode 407, when Dudley Moore decided to have a music-making robot, M.A.M.M.A., provide the music for the show, the band was against this, and Floyd did most of the talking for the band.

In episode 506, Floyd portrayed the role of the Caterpillar in the Muppets performance of Alice in Wonderland.

Some of Floyd's songs include "Ain't Misbehavin'" and "New York State of Mind".

Floyd was also very active in the Muppet movies and specials. In The Muppet Movie, he introduced each member of the band to Kermit and Fozzie. In one scene in Rocky Mountain Holiday, he and John Denver went fishing, and sang "Gone Fishin'" together. Floyd and Janice also introduced a selection of Muppet music clips together in The Muppets: A Celebration of 30 Years.

His original outfit was a suit similar to the ones worn by The Beatles on their album "Sgt. Pepper's Lonely Hearts Club Band", along with a green hat, though he sometimes wore the Muppet Show's signature purple tux as well.

During the last season of The Muppet Show, Floyd switched to a red jacket and varying shirt colors. In a Muppetism and a number of other later productions (including the French produced Muppets TV), he wore a blue jacket and a brown hat.

Since the Muppets' 2009 appearance at the D23 Expo, he regularly wears a jacket resembling his original outfit, with round gold buttons replacing the gold-threaded sling design on his chest. For his appearance on The Muppets, a replica of his original outfit was created. It was also used in Muppets Most Wanted, although Floyd still regularly appears in his gold-button outfit in promotional material. 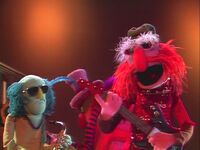 Floyd in his original outfit 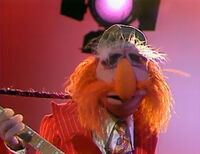 In his red jacket, which he began wearing in 1980 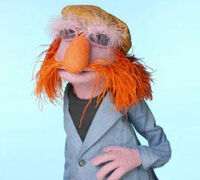 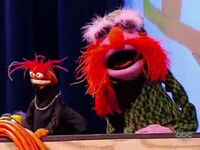 In his green outfit on Extreme Makeover: Home Edition 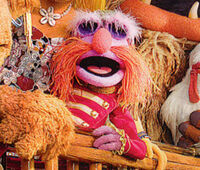 Back to the roots, in an outfit resembling his original attire 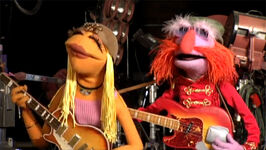 In a replica of his original outfit, recreated for The Muppets