Fluffster is Julia's favorite stuffed toy, alternately referred to as a bunny or a rabbit.

Julia brings Fluffster with her everywhere. She is often seen holding him as a source of comfort, especially when she feels anxious or upset, and even when she's engaged in drawing or another activity. Julia sometimes pretends to make Fluffster bounce, bobbing the toy up and down and chanting "Boing, boing, boing..."

In Julia's debut episode on Sesame Street, she creates a painting of a bunny resembling Fluffster with wings on its back. An animated video, narrated by Julia and her brother Samuel, features Fluffster as a superhero. (YouTube)

Family Forever: A Julia Storybook involves Julia accidentally losing Fluffster while out on a family picnic. Julia's family, along with Elmo and Abby Cadabby, help her look for Fluffster in the park. In the story, Julia reveals that Fluffster's favorite picnic food is frogs.

Fluffster figures prominently in the plot of Episode 5021, titled "The Fluffster Kerfuffle." Caught up in playing superheroes with Elmo and Abby, Rudy grabs Fluffster to use as part of their game, causing Julia to become very upset. Alan explains that because Fluffster is so special to Julia, it's not a toy she likes to share.

In Circle of Friends: A Julia Storybook, Fluffster's favorite snack is said to be carrot sticks. Julia brings him along with her to camp. Later, after making friends with a boy named Randy, she introduces him to Fluffster. In return, the boy introduces her to his stuffed elephant, Peanut, speaking for the elephant in a deep voice to say hello to Fluffster. 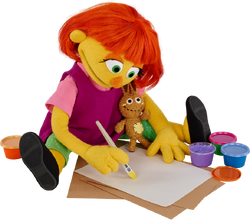