The Flute-Snatcher is a brown beaked monster who was created by Jim Henson for an unaired General Foods commercial in 1966 for three snack foods -- Wheels, Flutes and Crowns. In Jim Henson's Designs and Doodles, Alison Inches describes the Flute-Snatcher as "a speed demon with a long, sharp nose and windblown hair."[1]

The Flute-Snatcher later appeared briefly in the 1970 special The Great Santa Claus Switch (as one of the background henchmen) and in 1984's The Muppets Take Manhattan as one of the wedding guests, sitting at the end of the fourth row on the bride's side. 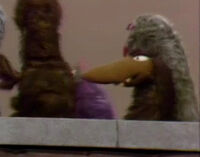 The Flute-Snatcher looks at the letter A on Sesame Street. 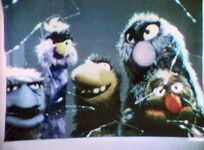 The Flute-Snatcher and his gang of monsters break a man's window in a Number Song Series segment on Sesame Street. 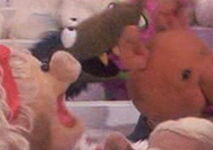 The Flute-Snatcher, at Kermit and Miss Piggy's wedding in The Muppets Take Manhattan. 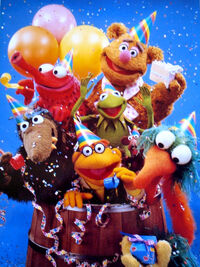 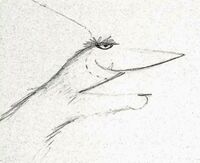 Flute-Snatcher (1966), sketch from Jim Henson's Designs and Doodles
Add a photo to this gallery

Retrieved from "https://muppet.fandom.com/wiki/Flute-Snatcher?oldid=1292091"
Community content is available under CC-BY-SA unless otherwise noted.