Wayne and Mulch, as the Hunchback of Notre Dame, sang a parody of this song, "For Me and My Goyle", to his gargoyle bride in the opening number of episode 509. 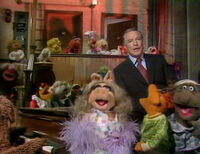 Gene Kelly and the Muppets medley
Add a photo to this gallery
Retrieved from "https://muppet.fandom.com/wiki/For_Me_and_My_Gal?oldid=567559"
Community content is available under CC-BY-SA unless otherwise noted.