Forum:Cyndi Lauper and Rizzo the Rat

Edit
Forums: Index > Article Content > Cyndi Lauper and Rizzo the Rat
Participation in the Muppet Wiki Forums requires a full understanding of the Rules and Etiquette.

Ryan recently came across a newspaper clipping from 1984 mentioning Cyndi Lauper hanging out with Rizzo the Rat for some unspecified event. Jog found two pictures of the pair, each from a seemingly different occasion as noted by their attire and her hair. One is a photo that appears to have been scanned from a magazine, and the other is a screenshot with a watermark indicating that it may have aired on VH1. I couldn't find anything more about either appearance, but Carolyn messaged Steve Whitmire on his Instagram who said he remembers it and may write about it in a future blog. 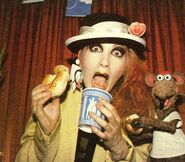 I just wanted to park this all here so we have a record of it and also as a reminder to keep an eye out for the launch of Whitemire's future blog. And of course to open it up for anyone else who may have more information. —Scott