Edit
Forums: Index > Article Content > She Drives Me Crazy Celebrities
Participation in the Muppet Wiki Forums requires a full understanding of the Rules and Etiquette.

If anyone is good at identifying mid-90s celebrities, there are about a dozen from the "She Drives Me Crazy" music video that we don't have identified on the wiki. I added screenshots of everyone in the video to help us pin down the remaining famous faces that briefly appear in the bizarre video. -- BradFraggle (talk) 19:45, 21 September 2021 (UTC)

I think the guy in the blue shirt and tie (at 3:25 in the "short" version) is David Brenner. - Shane

According to IMDb's listing, Sela Ward is in it. And I always thought that the kid jumping up the stairs was Jeremy Jackson (possibly from the set of Baywatch, though he would've barely replaced Brandon Call at the time). 🤷‍♂️ —Julian 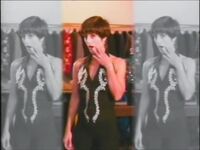 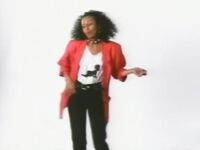 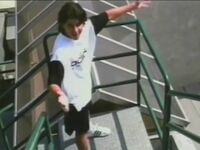 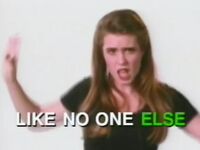 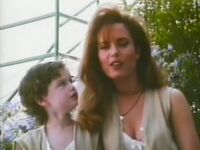 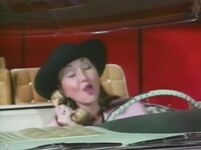 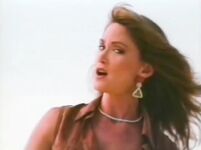 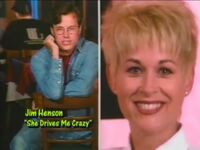 I still think the kid in the 3rd pic might be Jeremy Jackson, no? And I found this bit of (probably not very reliable) IMDb trivia claiming that Marie Osmond is in it (supposedly mentioned in one of her bios, according to one of the video's many YouTube comments), but that isn't Marie with one of her daughters in the 5th pic, is it?!? —Julian

Then again, Nate mentioned her too, back in the old MuppetCentral days, right here! —Julian

Okay, we're down to 7 celebrities now. On Reddit r/90s, one of the women was identified as Tamara Tunie. Googling, there's an old news article listing the mother and child as Tracey E. Bregman and Austin. -- Zanimum (talk) 00:35, 26 September 2021 (UTC)

Nick, the article you posted, also lists Martha Byrne, Courtney Thorne-Smith, and Brian Austin Green to be part of this. Green is also mentioned to (potentially?) have filmed footage for the video in this EW article about the music video (dated September 16, 1994). Could he be the kid jumping up the stairs? Doesn't really look like it's Green to me (but then again, we all know it's not easy bein' Green)! 😜 Here's a rather ridiculous, but fun little conspiracy theory: If you consider that he only picked the middle name "Austin" to differentiate himself from another actor with the same name when he joined the Screen Actor's Guild, and if you also consider that the setting that Tracey E. Bregman is in with her son Austin, is showing the very same Green railing in the background, how can you not jump to the far-fetched conclusion that all signs point to Brian Austin Green, right?! 😅 Then again, Thorne-Smith doesn't seem to appear, so maybe footage of the both of them, and of Osmond, and maybe others, just didn't make the cut? —Julian

Interesting! I have to admit, I didn't actually compare that article's list to this one! I'm stumped, but I've asked on Reddit for that image. (I'm trying to seed them out gradually, as to not overwhelm.)

Brian Austin Green is in yet another edit (I have a downloaded video from a VH1 airing, with John Landis intercut but not full wraparound, and this video is missing the last cut). Here he is, with his haircut at that moment. He pops up in two blink or miss shots, just miming/moving. There's at least one or two other substitutions in the VH1 version. When things slow down, I'll try to upload them. The guy in glasses here is on the Melrose Place set per the logo, so someone from there (I'm not entirely sure the one labeled as Grant Show is him, doesn't match his pics or hair color from the time, but I'm not a soap expert). -- Andrew

Nick, I checked the Reddit link, and while quite a few seem to agree with my initial hunch, that he looks like Jeremy Jackson (Hobie from Baywatch), I had also wondered before if it was Joey Lawrence, but even more so Rider Strong if you focus on the facial features alone.

Andrew, I do not think that is Brian Austin Green either; I think you got the UK cut, and that looks a helluva lot like Cal Cooper from the English multinational boy band Worlds Apart to me. He had just joined them in 1993, so the date checks out! Hmm, the guy in glasses doesn't look like any regular that I remember from Melrose Place... maybe a guest actor? —Julian

Looking at what this YouTuber calls the "UK version" (taken from when Kermit hosted the VH-1 UK's "Ten of the Best"), there are two additional celebrities added. -- BradFraggle (talk) 19:50, 28 September 2021 (UTC) 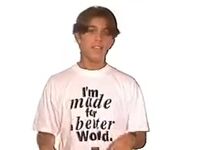 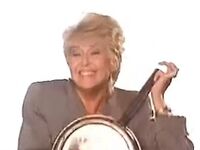 Brad, I still do not think that guy looks like Brian Austin Green at all; to me that's clearly Cal Cooper. Oh, and one of that video's comments identifies the female celebrity as Northern Irish television and radio presenter and singer Gloria Hunniford. —Julian

Yeah, Looking at pictures of Cooper circa 1993, I agree it's 100% him and not Brian Austin Green. Also makes sense that a UK pop star would be inserted into the UK version and omitted from the US cut (also would seem odd if they had the star of Beverly Hills, 90210 that they'd leave him out of the US cut but include him so heavily for UK audiences). -- BradFraggle (talk) 14:13, 29 September 2021 (UTC)

Might the one with the on-screen lyrics be the aforementioned Martha Byrne? Maybe those of us who are active on social media could just directly tweet @ the celebrities in question that were mentioned on these lists we found, for confirmation?! —Julian

I could be mistaken, and I wouldn't swear to it, but the woman with the bowl hairdo in the first pic makes me think of a young Pat Benatar, but I'm not entirely sure of just how relevant she was during the 90s, as most of her music that I'm familiar with was from the 80s. Again, this is just a guess. D'Snowth (talk) 18:48, 11 October 2021 (UTC)