Participation in the Muppet Wiki Forums requires a full understanding of the Rules and Etiquette.

Some stock image sites such as Getty and Alamy have a number of photos with Jim Henson and Kermit that appear to be from the same photo shoot, but have mixed captions. In them, Jim is wearing tuxedo pants and a black turtle neck, his hair is exactly the same, and the backdrops are similar. Some of them are credited to an appearance related to the Olympic Games in 1984, which according to his journal, we know is accurate. A few of them are credited to a 1983 appearance on the TV series Solid Gold, which I believe is erroneous.

I'm making this post in the event someone comes across the Solid Gold claim and starts an article for it, so that we have something to link to as a paper trail.

Credited to a fund raising benefit for the US Olympic Team at the Pasadena Public Auditorium on January 29, 1984 (this jibes with his journal)

Unless I'm missing something, these are all the same event, but Ron Wolfson captioned his set wrong. One possibility is that Wolfson confused Jim with Wayland Flowers who had a recurring segment with his puppet Madame on Solid Gold for several years. Indeed, the Flowers/Henson connection confusion appears to have carried over to IMDb who credit him as an "uncredited" puppeteer on The Muppet Movie, which is almost certainly one of those fake facts that IMDb is so well known for.

For extra measure, here's a photo 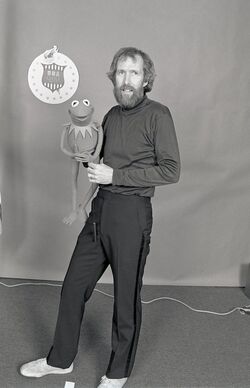 of Jim in which his hair and attire match the previous set. It's got a different background, but it seems clear that this is a deliberate backdrop with the Olympic logo. This was posted by Amy Eckermann on the Muppet Guys Talking Gacebook group (private link) from a negative she scanned. —Scott

Unless maybe they shot a remote thing for Solid Gold at the same time and place, it seems like an error to me. Why would he be posing with an American flag for a music show? - Shane

I think Wolfson's data is just all wrong. His photos claiming Solid Gold are also dated April 20 1983 and December 1 1982. —Scott