Our page for Sprocket says he "can be seen in Muppet Treasure Island at The Admiral Benbow Inn at the beginning while Billy Bones tells the story of a missing treasure." It's been on the page for a while (with discussion of it dating back 16 years).

I tried to find him in there to get a screenshot. I found this one shot of what might be him (exhibit A) and enhanced the contrast (exhibit B)... the resolution isn't great (maybe someone with the Blu-ray can get a better look). But I'm not certain that's Sprocket. It looks a bit more like another dog puppet (exhibit C) that was used as a sort of constable character in Muppet Christmas Carol (seen in the opening right after Lew Zealand throws his fish and in the "It Feels Like Christmas" number singing in the jail cell with a prisoner). 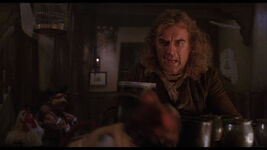 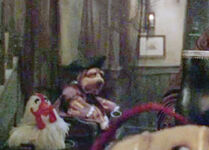 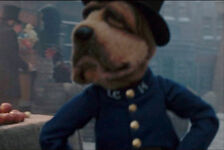 I saw your cite tag and went to look before I saw this forum post. Agree that's not him here's Exhibit A

with adjusted shadows. Also agree that it's the bassett hound-looking cop from MCC in Exhibit C. —Scott

Realizing that the still shot could still look like Sprocket in a way. Here's a gif showing the mouth moving which, to me, definitively proves it's not Sprocket. —Scott

Great! Yeah, that dog's definitely not Sprocket. It's one of those plausible-sounding claims that's floated around the world-wide-web for decades now probably based on fuzzy memories from fuzzy VHS tapes and just assumptions based off his appearance in MCC. So it's good that we do our due diligence and debunk and/or prove it either way. -- BradFraggle (talk) 21:41, 27 January 2022 (UTC)