Four Weddings and a Funeral is a 1994 Academy Award nominated romantic comedy.

During a scene at a wedding reception, Hugh Grant's character is seated at a table with several ex-girlfriends, and it's revealed that he referred to another girlfriend as Miss Piggy. During interviews for the DVD's special features, Grant reveals that his screentest took place in front of writer Richard Curtis, director Mike Newell, producer Duncan Kenworthy, "and about 400 Muppets." 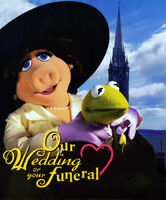 Wikipedia has an article related to:
Four Weddings and a Funeral
Retrieved from "https://muppet.fandom.com/wiki/Four_Weddings_and_a_Funeral?oldid=1166831"
Community content is available under CC-BY-SA unless otherwise noted.