Fozzie's Studebaker is the car bequeathed to Fozzie Bear by his hibernating uncle in The Muppet Movie. Kermit the Frog joins Fozzie in the car on their way to Hollywood, singing "Movin' Right Along" on the way. Following two close encounters with Doc Hopper, The Electric Mayhem repaint the car as camouflage, allowing the vehicle to blend in with a soda billboard.

Two Studebakers, 1951 Bullet Nose Commanders specifically, were used in the film. One unaltered vehicle was used for long-shots. The other car was specially outfitted to create the illusion that Fozzie was driving, with a monitor hidden in the car's bullet nose and the real driver in the trunk. The Muppet Show Fan Club newsletter offered further details:[1]

“How does Fozzie drive a car? He doesn't -- a midget drives the car by remote control from the trunk, using a television monitor to guide his steering. The puppeteers were lying on the seat or were scrunched on the floor and couldn't see a thing. The first time they tried 'driving', the television monitor went on the blink, and the driver had to be talked through the scene by an assistant director on a walkie-talkie. 'A little to the right, now, to the left... hold it...'”

One of the two repainted Studebakers is currently on display at the Studebaker National Museum in South Bend, Indiana. The car's paint has faded considerably, and the Museum is accepting donations to help them "restore this star to its former glory." 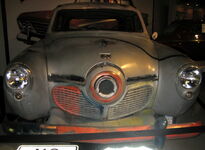 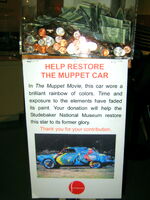 The Museum's appeal for donations. 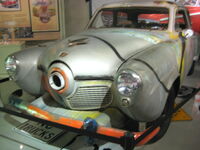 One of the two repainted Studebakers today. 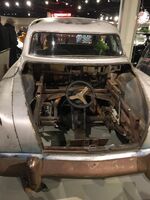 The trunk of Fozzie's car, outfitted for a stunt driver 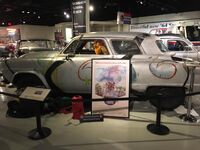 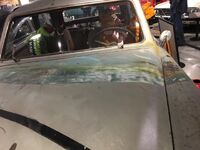 Costumes of Fozzie and Kermit sit inside the car 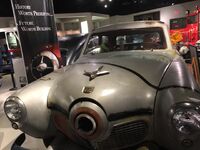 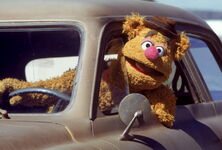 Wikipedia has an article related to:
Studebaker
Community content is available under CC-BY-SA unless otherwise noted.
Advertisement