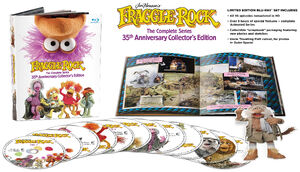 Fraggle Rock: The Complete Series 35th Anniversary Collector's Edition is the 2018 Blu-ray release of Fraggle Rock and its animated counterpart, distributed by Sony Pictures Home Entertainment. It is the first physical media release of the series upscaled to high definition from the standard definition source tapes.

While HD episodes had previously streamed on HBO, the picture had been cropped to fit widescreen TVs; the Blu-ray release preserves the series' 4:3 aspect ratio as originally taped and broadcast. Also, like the HBO rebroadcasts, the original opening and closing credits are preserved, with the "With Jim Henson's Muppets" opening multi-colored variants, and the Henson Associates/CBC Production ending credits. However, the release also continues to omit the alternate openings as with past home video releases (although on this release, only the audios to these openings are heard, despite using the usual footage of Boober).

New features in this release include a behind-the-scenes booklet built into the disc packaging, a sing-along option (stylized lyrics on-screen as an alternate to the subtitles), a 1993 appearance by Uncle Traveling Matt on The Today Show, and a two minute blooper reel with Jim Henson from the taping of the 1987 documentary Down at Fraggle Rock: Behind the Scenes.

To promote the release, the Fraggle Rock Facebook page published some short videos dubbed "Secrets of Fraggle Rock" with Brian Henson. The include Cantus the Minstrel [1], character names [2], and filming Fraggles in water [3].

Navigational menus on the disc include buttons for the contents of all 12 discs in the set, and do not correspond directly to the content of the particular disc being viewed. As such, navigating the set's content is reliant on a 13-page booklet loosely inserted within the disc sleeves.

Retrieved from "https://muppet.fandom.com/wiki/Fraggle_Rock:_The_Complete_Series_35th_Anniversary_Collector%27s_Edition?oldid=1205715"
Community content is available under CC-BY-SA unless otherwise noted.