Released in association with Muppet Music, the Fraggle Rock album was produced by Philip Balsam and Don Gillis.

This was the first Fraggle Rock LP, and featured songs from the first season. It was nominated for a Grammy Award for Best Recording for Children, but lost to Where the Sidewalk Ends.

The album was reissued in 1987 by Columbia Records, with one edit—the song "Dum of a Son of a Gun", sung by Pa and Junior Gorg, was not included in the re-release. The Columbia reissue of this album (and the Perfect Harmony album reissue), featured the album cover enclosed with a bright yellow frame.

The 1987 version of this album is a part of the Fraggle Rockin': A Collection 3 CD box set, released in 2007 by Koch Records.

In 1984, the album was released in the UK by RCA Records, featuring two additional tracks: an instrumental version of "Workin'" and "Travelling Matt" (aka "All Around the World"). The album also had the Fraggle Rock Theme replaced with an extended UK mix. 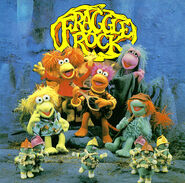 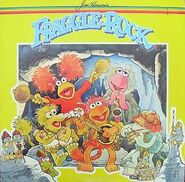 Cassette1987
Columbia Records
CT 40775
Add a photo to this gallery

Retrieved from "https://muppet.fandom.com/wiki/Fraggle_Rock_(album)?oldid=1136518"
Community content is available under CC-BY-SA unless otherwise noted.