An additional two toys were made for children under three:

Each toy came in its own Happy Meal box.

A McDonald's commercial showcasing the toys was also produced, with new footage of the animated Fraggle Rock.

A test version of the Fraggle Rock Happy Meal toys were sold the previous year in the southern part of West Virginia. Test Market Happy Meals are released on a very limited basis in a small area to test the popularity of the toys, and see whether or not a nationwide promotion is warranted. McDonald's has discontinued this practice in recent years. 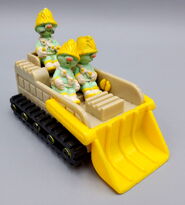 Package in which they came

This set is very rare and sought after, particularly the Doozer toys.