The Fraggle Rock Theme is the main title song for the live-action and animated versions of Fraggle Rock.

In the accompanying footage, the opening begins with a shot of Doc's Workshop, leading to the "Fraggle hole", where Gobo runs down the tunnel to join the rest of the cast, who sing a verse of the song. Then, the Doozers sing a verse and the five main Fraggles announce their names. Gobo then runs to the hole that leads to The Gorgs' Garden, and briefly gets captured by Junior Gorg. However, when Junior shows his Ma that he caught a Fraggle, she screams, causing Junior to accidentally toss Gobo into the well that leads to the "Fraggle Pond". Back in Fraggle Rock, everybody ends the song. The theme ends with Boober saying, "Down at Fraggle Rock".

In the context of the show's internal history, the song was written by the great and wondrous ancient Fraggle named Blundig (as revealed in "Mokey Then and Now"). Red Fraggle parodied the song as "Boober Rock" in the episode of the same title. In "Boober's Dream", Sidebottom sings a part of the theme, right after "Dream a Dream (and See)" ends. Gobo also whistles the theme in "Gobo's School for Explorers" and sings it in "The Riddle of Rhyming Rock".

The opening was severely shortened for airings on TNT, the Odyssey Network, and The Hub. Before the first verse ends with "Down at Fraggle Rock", it cuts right to the end of the final verse, right before Boober ends the song. The Hub's airing of "Don't Cry Over Spilt Milk" leaves the intro sequence unaltered, probably due to the episode's length.

The opening appeared, in full, as a preview promoting Fraggle Rock video releases from Jim Henson Video with an added voiceover (supplied in differing versions by Beau Weaver or Brian Cummings). The preview appeared on the 1993 VHS releases of The Muppet Movie and The Great Muppet Caper and several other Walt Disney and Buena Vista home videos of the time.

On the Dance Your Cares Away: Evolution of Fraggle Rock Theme Song bonus feature from the Fraggle Rock: Complete Series Collection, songwriter Philip Balsam explains how the song was conceived. It is revealed that at least 17 different themes were written or recorded, and Jim Henson chose the eleventh version to use as a model for the final theme song. One theme song featured mostly scatting instead of lyrics, and this inspired the closing theme.

The bonus feature includes an excerpt of an early version of the opening which was taped but not used. In this version, the main five Fraggle characters bang the pipes near the Fraggle Pond (a la the Pipebangers), causing Doc to observe his water pipes. Gobo peeks out of the Fraggle Hole, is noticed by Sprocket, then rushes back to the Rock, singing about how great Fraggle Rock is. In one lyric, Boober notes that "Fraggle Rock is the spot where the job that you got is 'whoopie'!" This was then followed two verses: one by the Fraggles and the other by the Gorgs.

In a 1998 interview, Terry Angus stated that the original opening "didn't explain the show very well... At that time everything was zipping by so fast they didn't show how everything was connected." The opening theme was re-shot to better express the theme of interconnectedness between the different species and worlds, adding a verse by the Doozers, who didn't appear in the original version. In addition to this, the Gorgs don't have a singing verse.

In The Muppets: A Celebration of 30 Years, two brief clips from the original opening were shown while "Down at Fraggle Rock" was sung twice, before Boober ends the song. 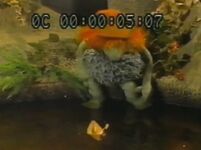 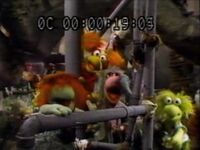 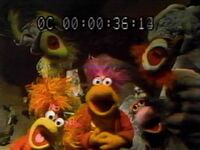 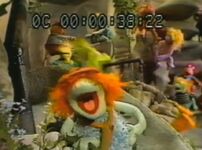 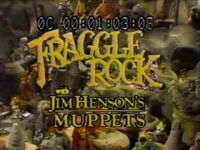 While the latter was retained in Disney Channel airings, the regular theme, ending with Boober's line, replaced both versions of the openings for subsequent re-airings, international versions, and DVD releases of the episodes, with the exception of the Dutch and Polish dubs. The ending with Wembley can also be found on the bonus material of the third season DVD set at the end of an HBO promo for "The Terrible Tunnel."

For the 2016 remastered versions of the episodes (as streamed on HBO and released on Blu-ray), the audio of both alternate intros is retained in their respective episodes, but the video is replaced with the typical Boober shot.

The French and German co-productions used the same instrumental recording of the theme tune used in the original American version, simply using the new footage of the altered Doc and Sprocket segments and dubbing the lyrics and dialogue in their languages. Other international dubs were simply dubbed over in their respective languages. The UK co-production's opening was edited differently. It still used the original recording of the theme tune, only with some additional music and sound effects laid over to stretch the extended time frame, as there was a long exterior shot of the Lighthouse, and the UK version replaced the shot of Doc and Sprocket from the American version with a panning shot of the Lighthouse's interior.

The album version of this song was longer. It opened with Sprocket barking at the Fraggle hole and Doc asking what he was barking at. It also had more lines of dialogue, including a verse sung by Junior, and a scat-singing verse performed by Gobo (which uses the same melody as the deleted lyrics from the demo version), followed by an instrumental saxophone solo of the same verse, and another scat-singing rendition of said verse by both Gobo and Wembley. Subsequent album releases often shorten the instrumental break after Junior's verse, resulting in Gobo having only one scat-solo, as well as having the chorus being sung twice at the end, rather than three times. The only album that uses the original TV version is Perfect Harmony, cutting out the part with the Gorgs.

There are also several international edits to the album version:

A shorter version of the Fraggle Rock theme song was used as the closing theme for the show. It opened with scat-singing by Gobo and Wembley, followed by two verses of the song performed by the Fraggles.

On TNT and the Odyssey Network, the closing was shortened. For the Odyssey Network re-runs, after "Dance your cares away..." is first sung, it cuts to the rest of the second verse with the shot of Red falling into the Fraggle Pond. TNT uses an even shorter version, retaining only the second half of Gobo and Wembley's scat-singing and the first verse by the Fraggles.

In the final episode of the series, the closing theme was sung by the entire cast during the end credits: the Fraggles, the Doozers, Marjory the Trash Heap, Philo and Gunge, the Gorgs, and even Doc and Sprocket, who wrap it up in the same fashion that Boober does for the opening.

While the final episode's end credit song is a variation of the theme, two other episodes featured entirely different songs during the end-credit roll:

On some international versions of the episodes, these endings were replaced with the standard closing theme.

Interestingly, the German dub of the closing theme features more lyrics during the scat verses, acknowledging the end of each episode and inviting the viewers to tune into "the next Fraggle fun".

Retrieved from "https://muppet.fandom.com/wiki/Fraggle_Rock_Theme?oldid=1375364"
Community content is available under CC-BY-SA unless otherwise noted.