François Chau (b. 1959) is a Cambodian actor who appeared on-camera as the Shredder (with voice dubbed by David McCharen) in Teenage Mutant Ninja Turtles II: The Secret of the Ooze. Chau's credits range from the voice of Quick Kick in the Marvel Productions animated series G.I. Joe to a recent recurring role on Lost as mysterious DHARMA Initiative associate Dr. Chang.

His character of Dr. Chang was eventually made into a puppet, in the actor's likeness, crafted by The Jim Henson Company for LOST Untangled. The two alter egos appeared together in LOST Untangled - Everybody loves Hugo. 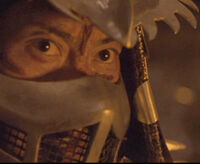 Francois Chau as the Shredder

The Dr. Chang puppet on LOST Untangled
Add a photo to this gallery

Wikipedia has an article related to:
François Chau
Retrieved from "https://muppet.fandom.com/wiki/Fran%C3%A7ois_Chau?oldid=1071173"
Community content is available under CC-BY-SA unless otherwise noted.