François Fromage and his Dancing Cheeses were six tapdancing cheeses who opened the first episode of Muppets Tonight. Their leader, François Fromage, was performed by Bruce Lanoil.

Their act came to a sudden ending when all the cheeses started to melt under the hot studio lights. They finally ended up in Rizzo's stomach.

Some members were seen in episode 102 as the Longhorn Cheddar Cheeses.

Some of the cheeses reappeared in Mopatop's Shop in various roles and were used in a Trash Gordon segment on Sesame Street.

The wheel of brie cheese appeared with Linda Cardellini, aptly named Brie, during the "Lifesty(le)" segment in the Muppets Now episode "Getting Testy." 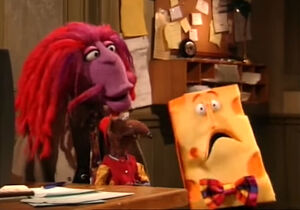 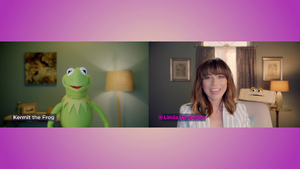 Brie (right) on Muppets Now
Add a photo to this gallery
Retrieved from "https://muppet.fandom.com/wiki/Fran%C3%A7ois_Fromage_and_his_Dancing_Cheeses?oldid=1316708"
Community content is available under CC-BY-SA unless otherwise noted.