Frances "Fran" Sinclair is an allosaurus, and one of the stars of Dinosaurs. The daughter of Louie and Ethyl Phillips, she is married to Earl Sinclair. Fran and Earl have three children -- Robbie, Charlene, and Baby Sinclair.

She is very sensible and does nearly all of the housework, especially in the kitchen. She often feels unappreciated and wishes the family would spend more time talking together. She tries to talk Earl (or someone else) out of making reckless decisions, though she isn't always listened to.

This isn't to say that she is completely above making similar mistakes, however. In "Out of the Frying Pan", for example, she becomes a bit too obsessed with making Baby a star, and even Earl points this out.

She is loving towards her children and wants what's best for them. In "Charlene's Tale", she tried to console Charlene over her insecurity about not having grown a tail yet, saying that a beautiful body isn't as important as a beautiful mind. 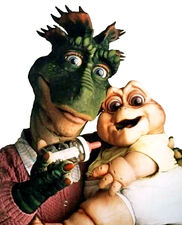 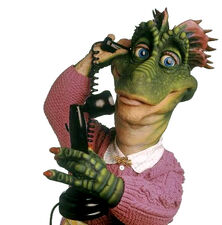