France is a European nation famed for its cuisine, the Eiffel Tower, and a populace stereotypically marked by snooty accents and moustaches. The country donated the Statue of Liberty to the United States of America. Miss Piggy has famously affected a French accent and a Parisian sophistication, and used to pretend she could speak French. In Muppet Treasure Island, an indignant Benjamina Gunn (played by Piggy) claims her mother came all the way from France for the wedding to Captain Abraham Smollett. 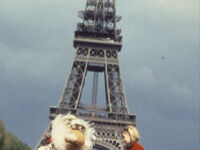 Uncle Traveling Matt at the Eiffel Tower on the French Fraggle Rock. 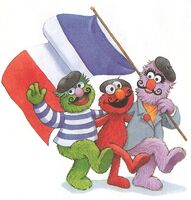 Big Bird and Elmo in a poster from Plage de Repos, as illustrated by Ernie Kwiat.

Wikipedia has an article related to:
France
Community content is available under CC-BY-SA unless otherwise noted.
Advertisement