Francis Wright is a British puppeteer who puppeteered one of the Devils in The StoryTeller episode "The Soldier and Death" and served as both puppeteer and voice of the March Hare in Alice in Wonderland.

Wright's other puppetry credits include Spitting Image, several UK children's shows, and a BBC TV adaptation of Five Children and It, as the Psammead. 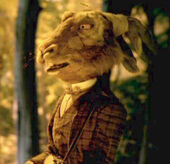 The March Hare.
Add a photo to this gallery
Retrieved from "https://muppet.fandom.com/wiki/Francis_Wright?oldid=1071124"
Community content is available under CC-BY-SA unless otherwise noted.