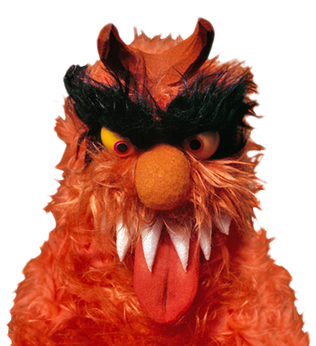 Frazzle is a growling monster on Sesame Street. His deceptively fierce visage hides a child-like personality and a desperate need to be included. Although he can be intimidating to others, Frazzle has emotions like the rest of us do, as expressed in his eponymous song, "Frazzle." However, since his snarls and roars sound identical, regardless of his mood, the song required skilled interpreters, in the form of the Frazzletones.

In Episode 3643, it is implied that Baby Natasha can understand him and vice versa. His father also speaks in the same monster language (as heard in a telephone conversation with his son in Episode 3681), while his mother speaks English (with a refined British accent).

Though his appearances were sporadic throughout the series, he earned a bigger, recurring role in seasons 28 and 29, most often as a member of Gina's day care service.

There are two known occasions where Frazzle spoke coherently. In Julie on Sesame Street, a female Anything Muppet transforms into a monster as she sings "I Feel Pretty." Once transformed, her husband, Frazzle, knocks on her door and calls, "Hiya, honey!" as the two embrace each other.

The second occurrence is Episode 3156. In that episode, Frazzle brought his pet human Pickles to the Furry Arms Hotel. When they were refused a room, Frazzle complained, "Well, it's just not fair! What am I supposed to do, leave little Pickles at home when I'm traveling on business? Come, Pickles, we'll go to another hotel!" However, while the puppet was identical, Frazzle was performed in the episode by Martin P. Robinson instead of Jerry Nelson, had a markedly different voice and personality, and might be considered a case of Recycled puppets.

Frazzle also made some cameos in the special Sesame Street: 20 and Still Counting. When appearing with Bill Cosby and some other monsters, he was performed by Richard Hunt.

In his earliest appearances, Frazzle was made from a Pumpkin Anything Muppet covered with a fur exterior to turn him into a monster. In the 2001 song "Everybody Be Yo'Self," Frazzle was finally re-built as a unique puppet.

Although Frazzle appears occasionally in re-used bits in current episodes, his latest appearances in new material include a Facebook application, video footage for "The Color Orange Day" on Sesamestreet.org and a season 44 sketch with Grover (performed by Joey Mazzarino).